A 200-strong illegal rave was broken up by police at the weekend as forces across the country vowed to crack down on lockdown parties.

Officers raided an unauthorised woodland gathering in Vigo Village in Gravesham, Kent, at 10pm on Saturday.

They said the ‘extremely disruptive’ event had a ‘detrimental impact on the most vulnerable members of society’.

It comes after two men in their 20s were stabbed during a beach rave 40 miles away in Leysdown at 11.55pm on Thursday as a suspect was arrested and bailed.

Police forces across the country pledged to crack down hard on illegal social gatherings after thugs attacked them at meet ups last week. 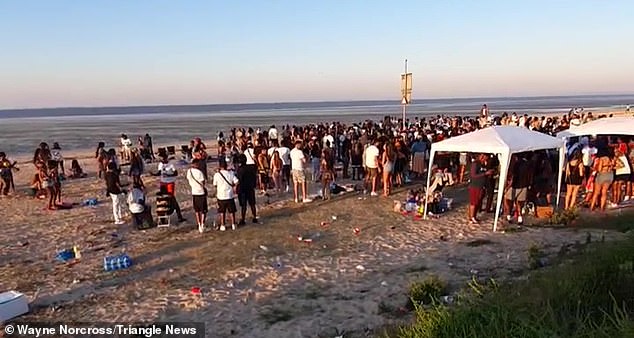 It comes after two men in their 20s were stabbed during a beach rave 40 miles away in Leysdown (pictured) at 11.55pm on Thursday as a suspect was arrested and bailed

Assistant Chief Constable of Kent Police Nikki Faulconbridge said: ‘While it is understandable that people should miss being able to visit nightclubs, festivals and concerts at this difficult time, that is no excuse for anyone who might be thinking about organising an unlicensed music event.

‘Such events have been illegal for many years but the increased risk of passing Covid-19 from one person to another makes it even more important that people do not hold or attend any mass gatherings of this nature.

‘This is why we will continue to take robust action and will not hesitate to bring people before the courts if necessary.

‘These events have a detrimental impact on local communities and in particular the most vulnerable members of society who are already being badly affected by the impact of the coronavirus.

‘People who organise inappropriate gatherings and help to publicise such events should consider their individual responsibilities for following Government advice and encouraging others to do the same, at a time when Covid-19 continues to pose a significant risk to public health.’ 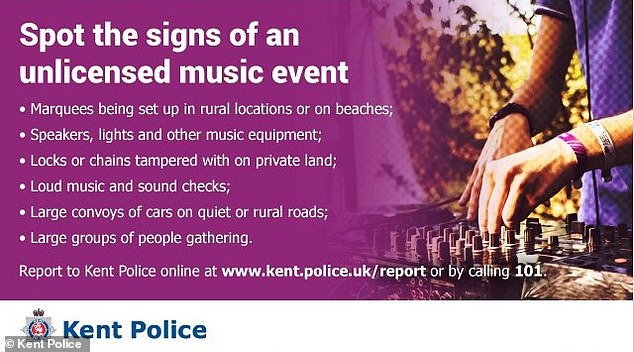 Nightclubs, concerts and festivals remain closed under the lockdown restrictions and unlike pubs will not reopen during the next easing of measures on July 4.

People are banned from mixing with more than six people from different houses and have to remain 2m apart when they do socialise.

Police across the country vowed to crack down hard on illegal parties after thugs attacked officers breaking up events in London last week.

A massive block party in West Kilburn on Friday moved to Maida Vale where riot police battled hundreds of revellers who threw missiles at them. 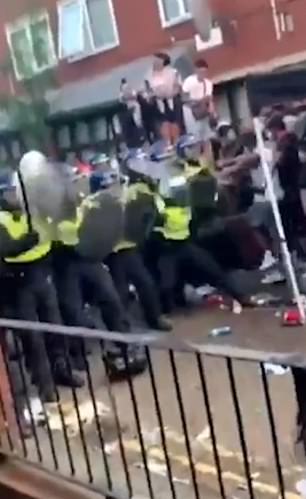 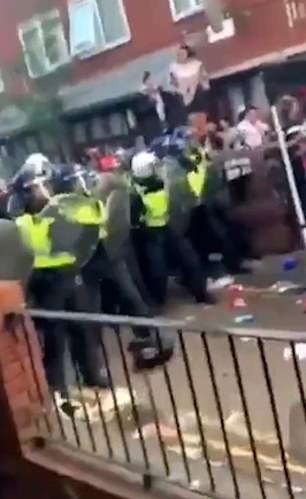 It marked the third night of unrest after raves Brixton and Notting Hill both turned violent and led to police injuries.

The Met pledged to put around 1,000 riot-trained officers on standby and more than 80 police vans on the streets over the weekend. 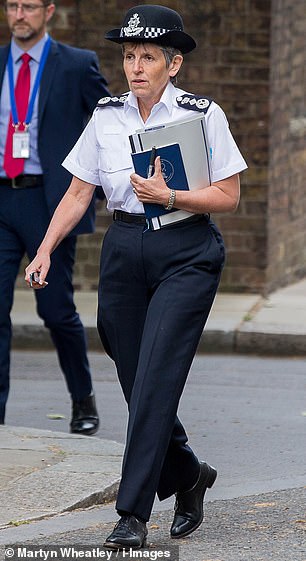 In Cheshire, police vowed to crack down on a planned rave in Knutsford at the weekend while Staffordshire officers warned potential revellers to ‘pause and think’.

A dispersal order was in place in Liverpool after rowdy football fans set fire to the Liver Building as they celebrated their club’s Premier League title win.

She wrote in the Sun it had been a ‘very difficult week’ in the capital, with officers coming under attack as they tried to break up crowds.

She said: ‘The officers I met this week were poised to deal with whatever they faced. Hundreds ready in full kit, should there be a violent or aggressive crowd to deal with.

‘My message to those involved in thuggery and criminal damage is consequences will follow.’

Dame Cressida earlier said the force had a ‘duty’ to stop unlawful music events during the coronavirus pandemic.

She said police were watching out for illegal parties after dozens of officers were injured in violent scenes in Brixton on Wednesday and in Notting Hill on Thursday. 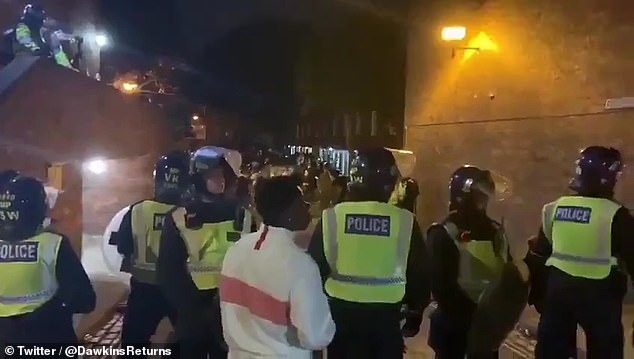 Police were seen breaking up a huge street party in Maida Vale, London, on Friday night

She added: ‘We have seen some large numbers of people completely flouting the health regulations, seeming not to care at all about their own or their families’ health and wanting to have large parties.

Home Secretary Priti Patel told the Daily Express those who attack police ‘will be taken off our streets’.

Meanwhile national chair of the Police Federation John Apter warned loosening the lockdown on July 4 could be ‘a countdown to party time’.

He said: ‘This will, without doubt, add more pressure on policing, paramedics and the wider NHS.’