We should be proud of our coastline. It’s the envy of many other countries, not just for its varied landscapes and seascapes but because of our right to roam.

What’s more, next year the England Coast Path aims to join the gaps between the long-distance footpaths, as well as improve existing trails.

It’s been a mean feat so far, involving endless red tape — including persuading thousands of property owners to agree to walkers crossing their land. 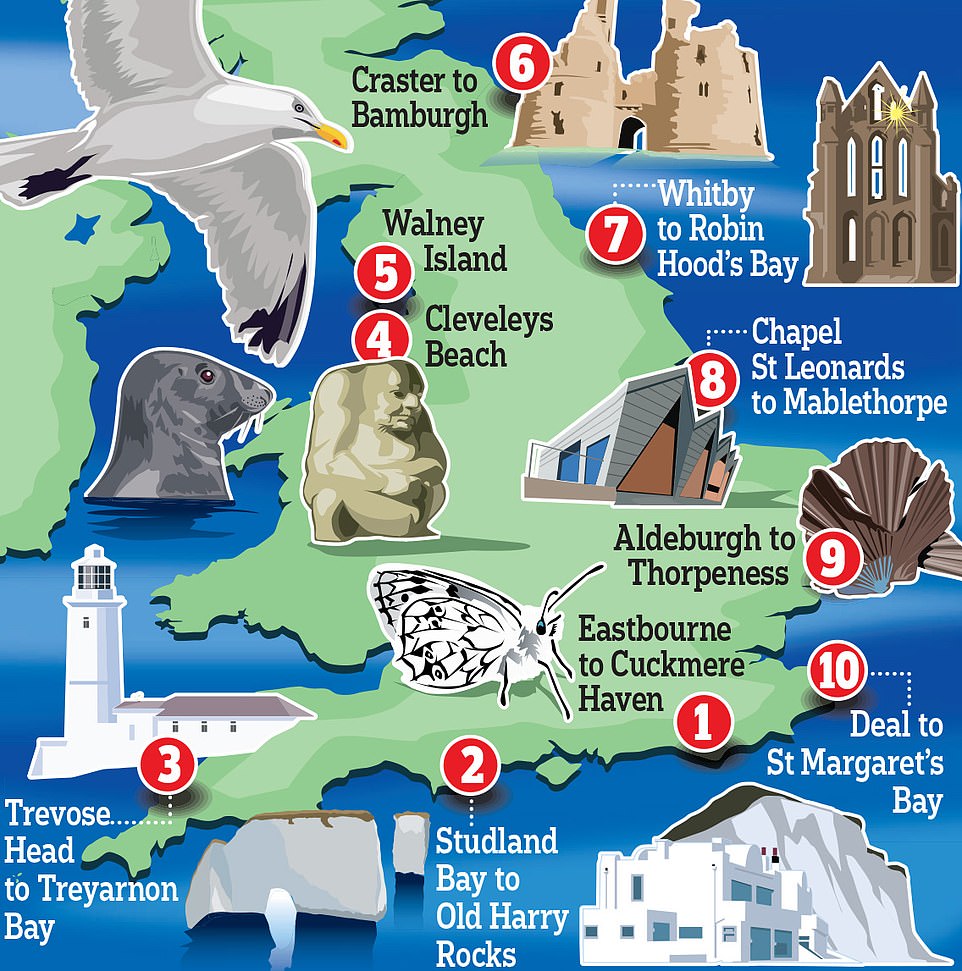 When it’s finished, it will be the longest coastal path on the planet. Rather impressive, given the size of our little island.

Wherever we are along the English coastline we’ll be able to take a hike — in any direction. Along the way, you’ll find soaring cliffs, wildflower-filled meadows, dappled woodland, saltmarshes and mudflats.

There are historic villages and towns, as well as beaches — from swathes of creamy sand to pebble coves.

Our coastline gives a generous taste of our rich seafaring and smuggling history, our castles and forts, our myths and legends, our wildlife and our people. Here are ten of the best summer coastal walks… 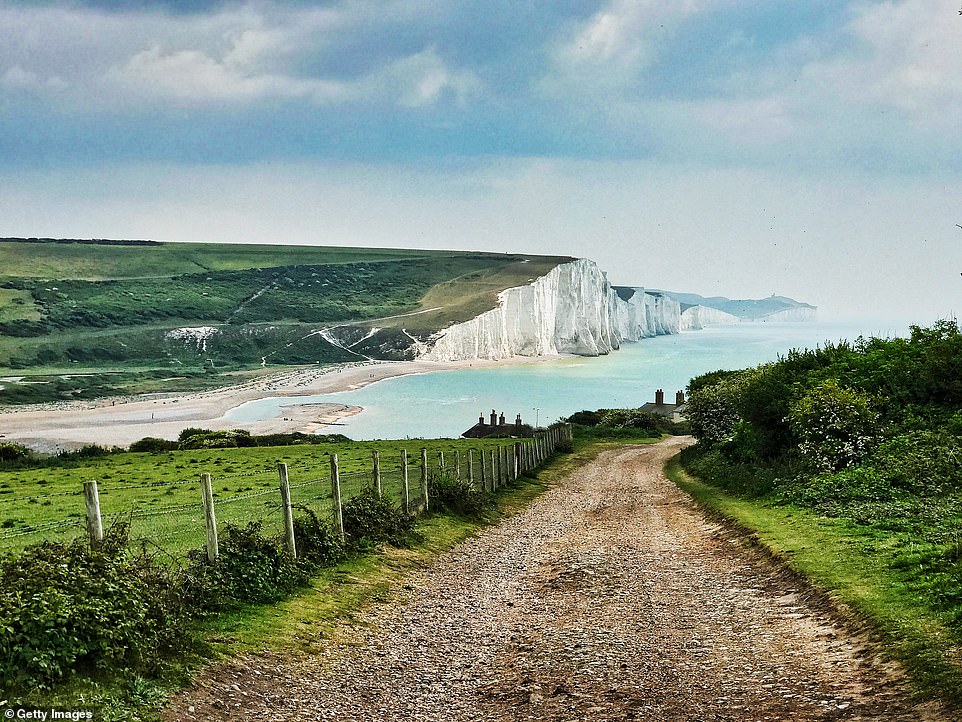 There are views of Beachy Head, and when you reach the infamous spot, there’s another stonking vista — the iconic Seven Sisters chalk cliffs, gleaming white against the sea. While you cross them, spot birds and butterflies and inhale the scent of herbs.

Cuckmere Haven, where the Cuckmere River meanders into the sea, is a delightful place to end the walk.

Worth a detour: The beach at Birling Gap for rock pooling. Check the tides though, as this area can be hazardous. 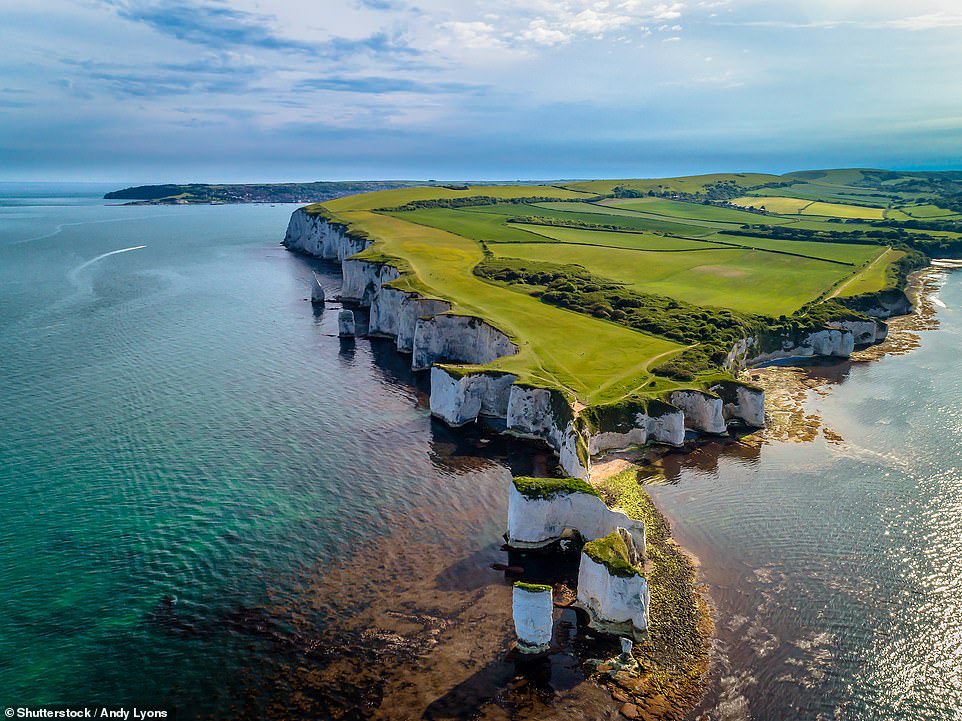 The spectacular chalk stacks known as Old Harry Rocks, pictured, which rise from the sea and mark the end of the Jurassic Coast

For a quick escape, walk one mile along the Studland Beach sand dunes trail to the spectacular chalk stacks known as Old Harry Rocks, from Knoll Beach car park.

The path wiggles through dunes and past heathland awash with purple heather and yellow gorse.

Old Harry Rocks rise from the sea at Handfast Point and mark the end of the Jurassic Coast.

Worth a detour: Little Sea is a freshwater lake and a haven for wildlife, including otters and egrets. 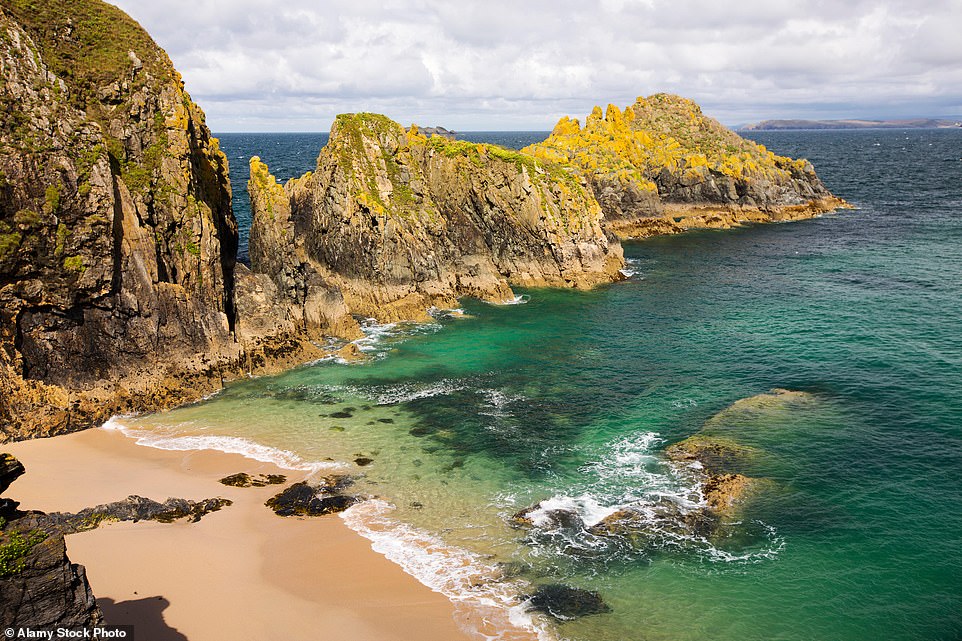 Coast worth a boast: Trevose Head in Cornwall, where you may spot dolphins and seals

Visit Cornwall’s Trevose Head for the lighthouse and 80ft-wide blowhole, then set off on this 5.5-mile wander along the South West Coast Path.

The area is steeped in myth and legend and has some of the county’s most spectacular beaches, from rocky coves to sandy sweeps, such as Constantine Bay and Booby’s Bay (named after a seabird).

Look out for dolphins and seals.

Worth a detour: Swim in the rock pool on the ledge above Treyarnon — it’s like a giant natural infinity pool. 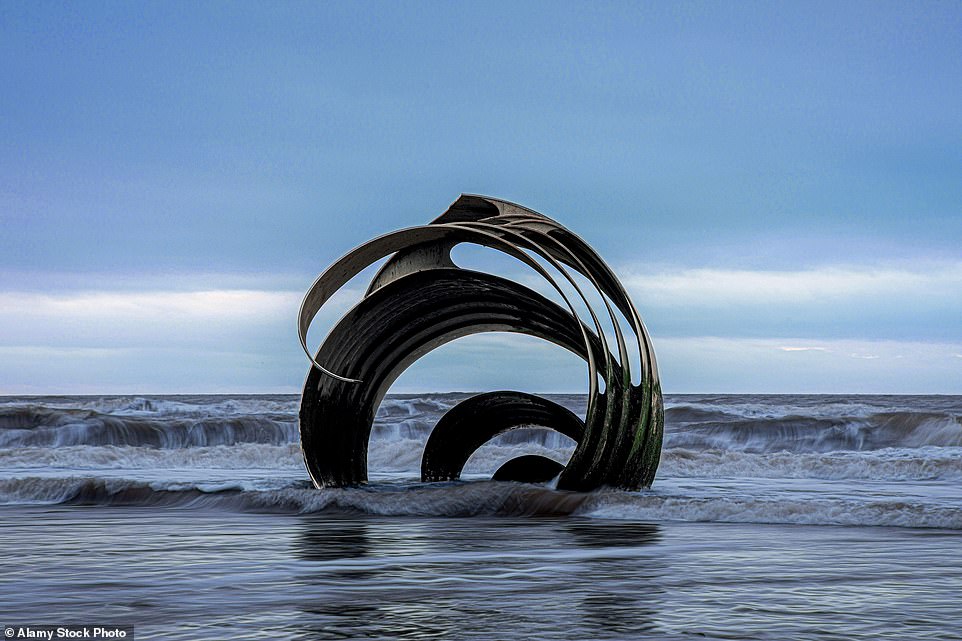 A sculpture on Cleveleys Beach near Blackpool, which is part of the Mythic Coast art trail

This beach, near Blackpool, has more of interest than most.

The Mythic Coast art trail — aka The Sea Swallow — is a series of sculptures based on local fact and folklore.

The best selfie spots are next to the exquisite metal giant shell or stone ogre.

Worth a detour: Shipwreck Abana, which was wrecked in 1894 when it mistook Blackpool Tower for a lighthouse. 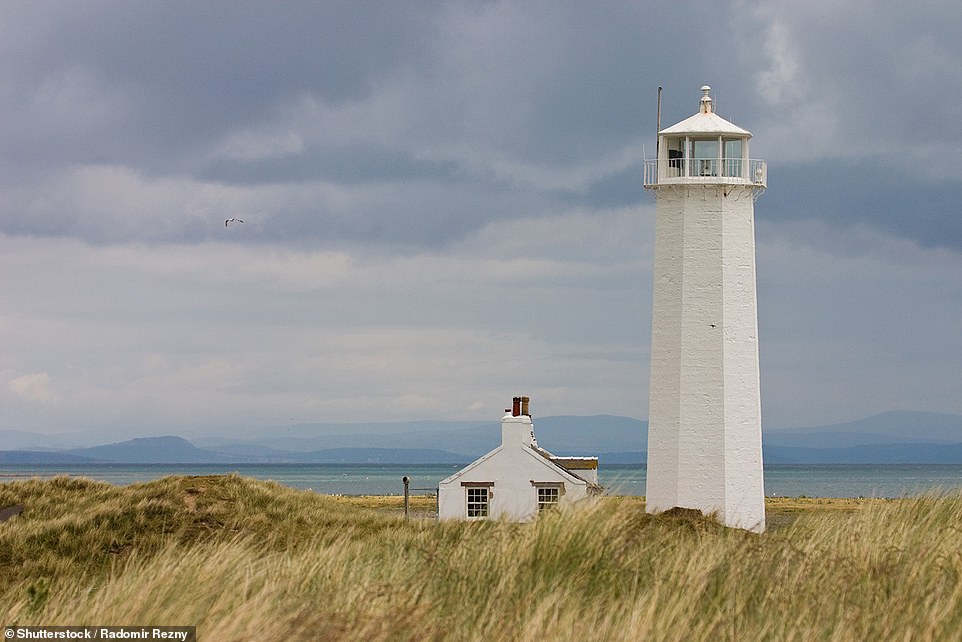 Walney is a Cumbrian island that is connected to the mainland via a bridge. It has views across the Lake District fells

This Cumbrian island connects to the mainland by a bridge. Migrating birds often touch down among the marshes and reed pools, so this is prime ‘twitching’ territory.

Plant life is rich, with carpets of wildflowers in the summer.

Views across Morecambe Bay and to the Lake District fells are spectacular.

Worth a detour: South Walney Nature Reserve for the chance to see grey seals, particularly at high tide.

6. Craster to Bamburgh – castle to castle 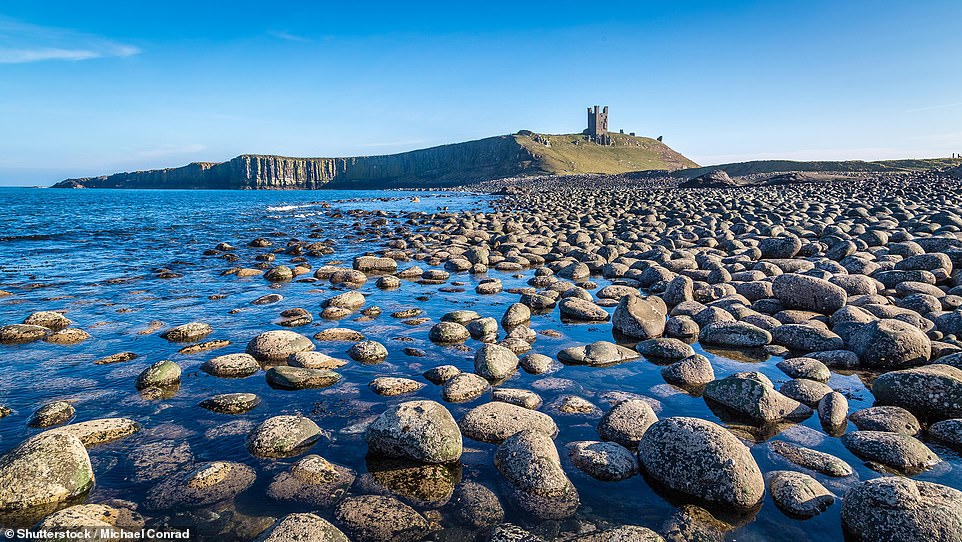 On the Northumberland Coast Path from Craster to Bamburgh, you pass the ruins of 14th-century sea fortress Dunstanburgh Castle, pictured

Cute Craster, known for its kippers, is the starting point of a 13-mile walk along the Northumberland Coast Path.

From here the route reaches Embleton Bay’s wonderful beach, and the ruins of 14th-century sea fortress Dunstanburgh Castle. The route continues to Beadnell, with its wild sands.

At Seahouses, spot the Farne Islands offshore, plus the castles at Lindisfarne (Holy Island) and Bamburgh. After Seahouses, the path diverts slightly inland, but if the tide is out, skip it and walk the last bit via the beach. 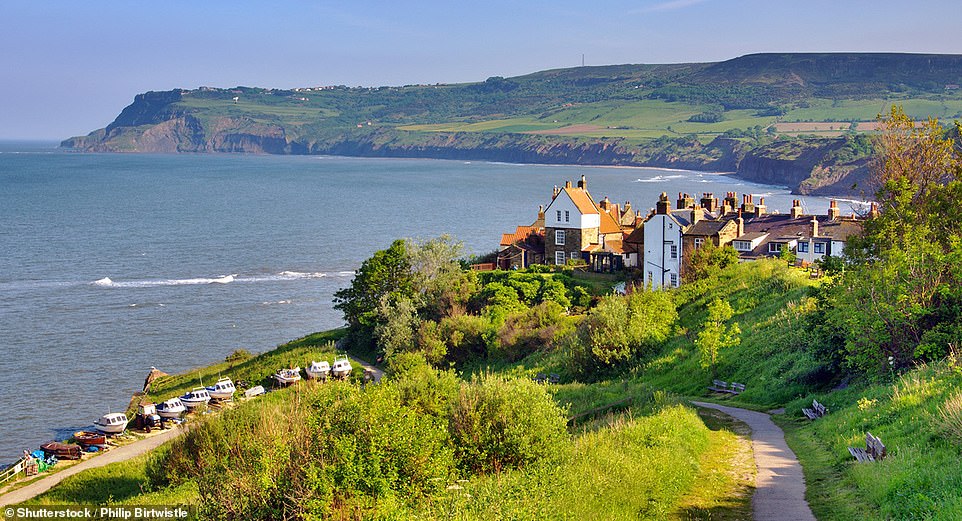 Bram Stoker found inspiration for his famous novel Dracula while staying in historic Whitby, with its atmospheric Abbey ruins.

That’s where this walk begins, before striking off for seven miles of the Cleveland Way towards the old smuggler’s haunt, Robin Hood’s Bay.

It’s a pretty route, hugging the cliffs on undulating headland. It takes you past Whitby lighthouse and disused alum pits, too.

Worth a detour: Whitby is famous for its jet — Britain’s oldest gemstone. Once the shops have reopened, browse for some souvenir jewellery. 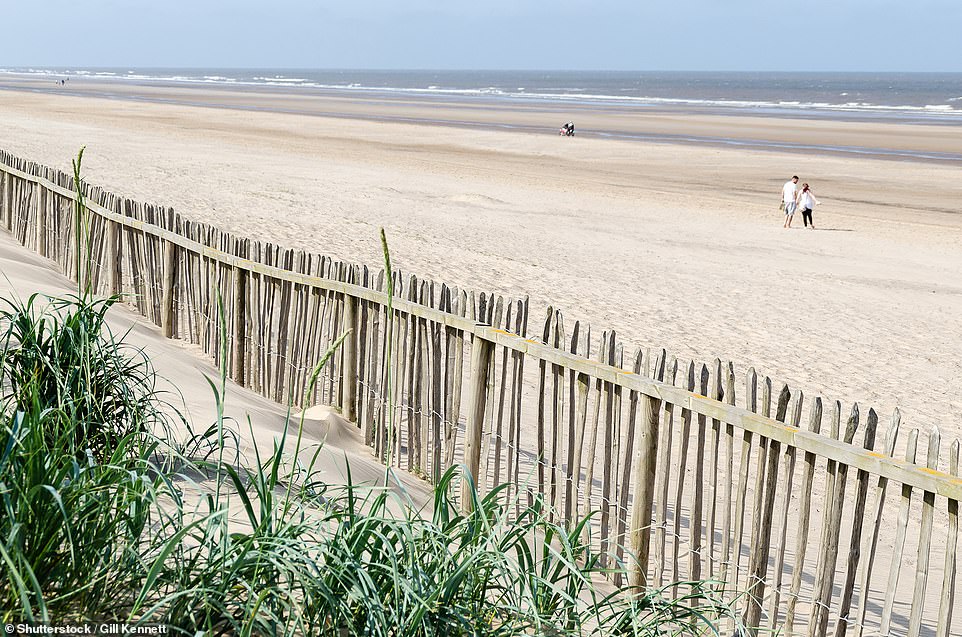 Mablethorpe beach, pictured, which is part of a new ten-mile stretch of the England Coast Path in Lincolnshire

This ten-miler, a new stretch of the England Coast Path, opens up an unspoilt part of Lincolnshire.

From here, beaches are protected as an important bird habitat. Between Wolla Bank and Mablethorpe look for branches poking up at the shore’s edge. A submerged prehistoric forest, which once stretched to the Continent, can sometimes be seen at low tide.

Worth a detour: The world’s first Cloud Bar (not that kind of bar) is on the tranquil beach at Anderby Creek. Lie on a platform, consult the cloud menu, and sort your cumulus from your cirrus. 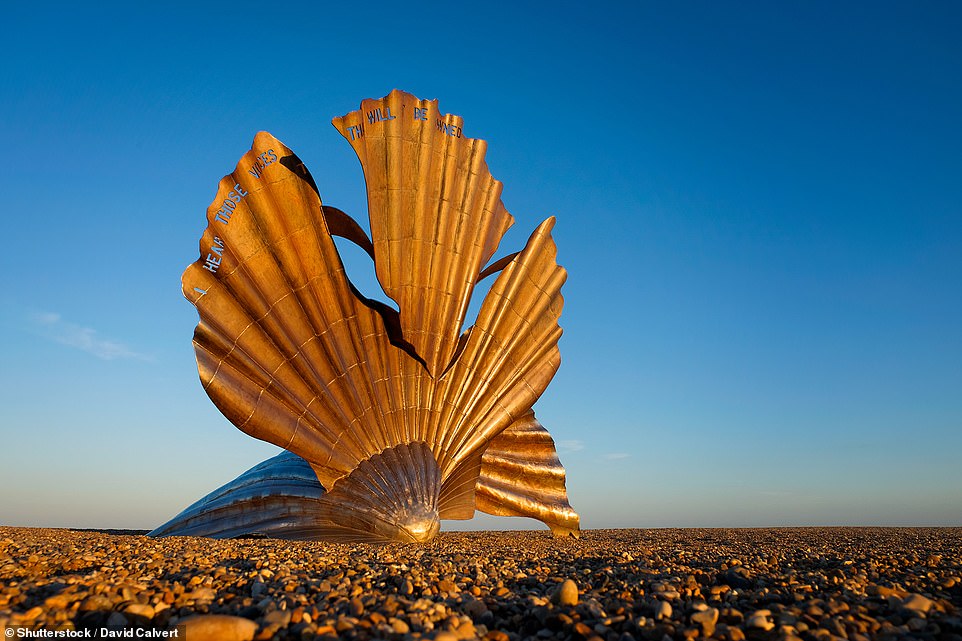 Many car parks and toilets are still closed. Restaurants and cafes (apart from takeaways) are closed.

Swim at your own risk — there may be no lifeguards on duty.

From Monday, you can meet with up to six people from other households, as long as you follow social distancing rules. You cannot stay overnight at a hotel, campsite or B&B.

National Trails  (nationaltrail.co.uk) — administered by Natural England — has details for all long-distance walks in England.

Rare flowers such as yellow horned-poppies and sea peas have pushed up through the shingle alongside the path.

Thorpeness was created as a fantasy holiday haven. While there, circle around the 60-acre Meare, a lake with ornamental gardens.

Most visitors, rather than following the coast path back, head to the RSPB North Warren Nature Reserve to see dragonflies, bitterns and nightingales.

Worth a detour: Get a takeaway from Aldeburgh Fish & Chips on the High Street to eat on the beach. 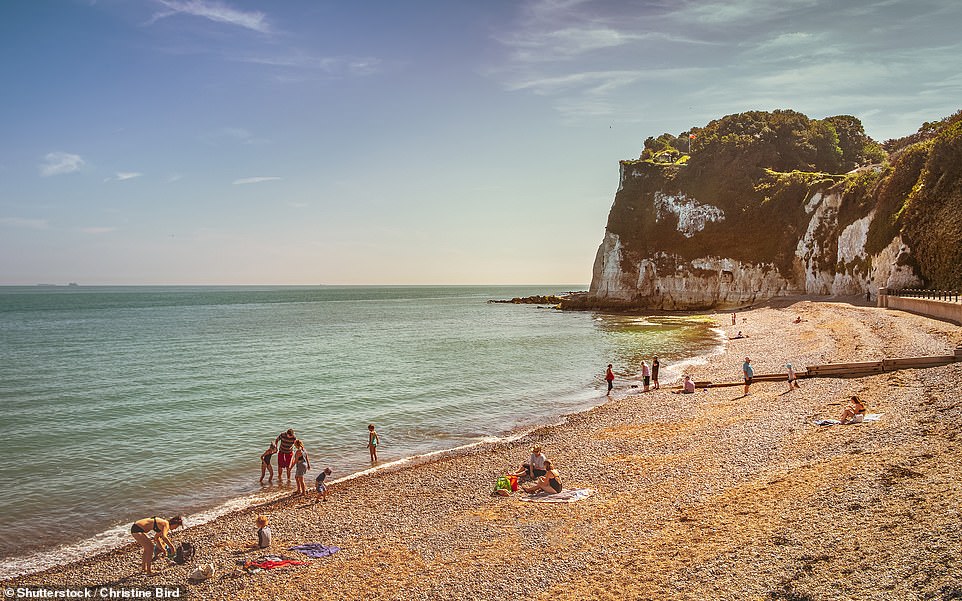 St Margaret’s Bay in Kent. It is the end point of a Kent coastal walk from the genteel town of Deal

Genteel Deal is where this walk of just over five miles begins. Enjoy the seafront view from the pier before hitting the England Coast Path.

It passes Walmer Castle, one-time residence of the Duke of Wellington, before ducking down to Kingsdown with its pub on the beach — closed right now, so bring a picnic. The views over the White Cliffs of Dover are mesmerising.

At St Margaret’s Bay, look for two white villas on the beach, once belonging to Noel Coward and Ian Fleming.

Worth a detour: Middle Street conservation area, in Deal, is packed with gorgeous Georgian terraces and Victorian villas.