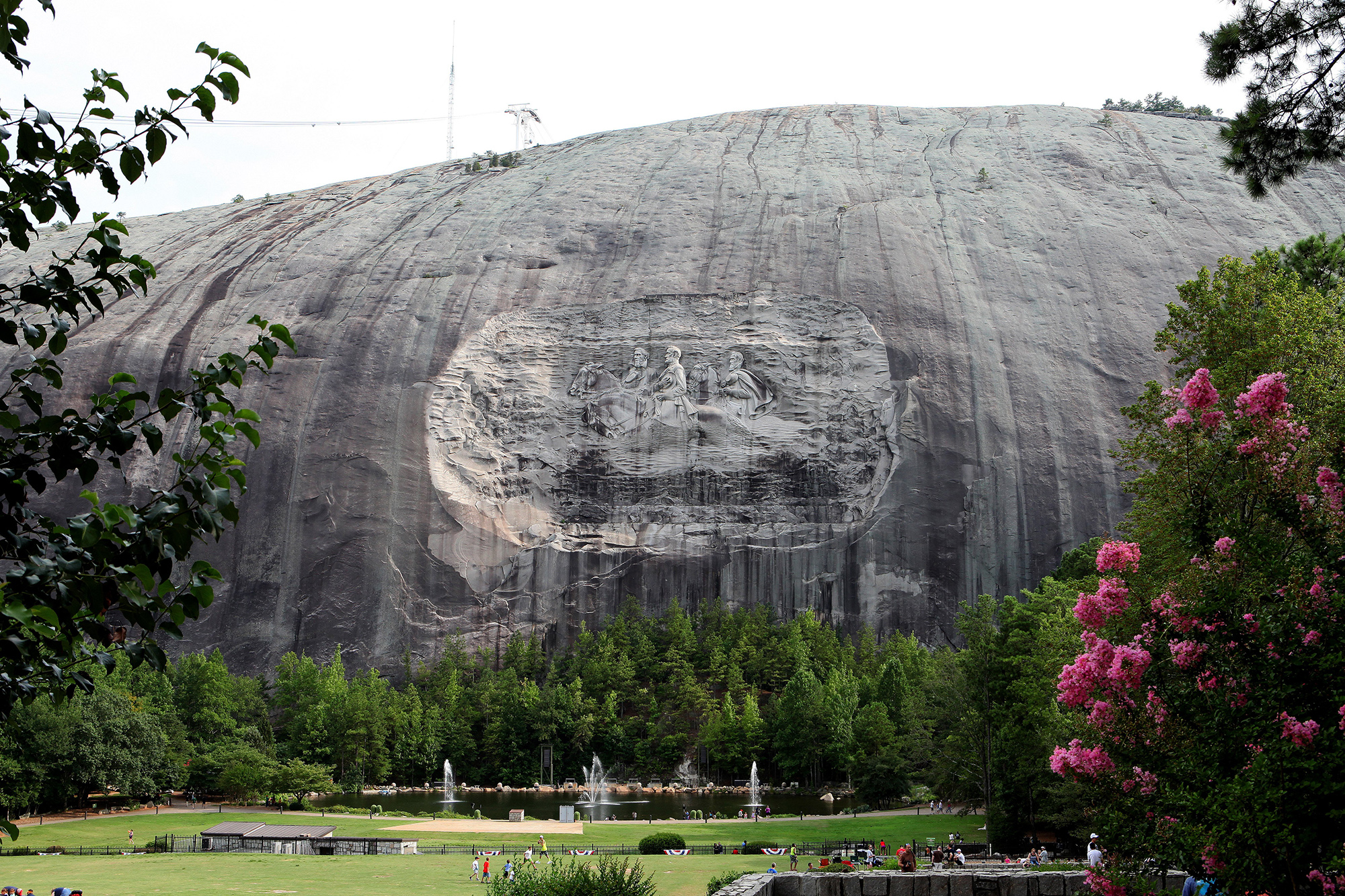 The Three Percenters militia applied last month to run a rally of more than 2,000 people to “to defend and protect our history and second Amendment rights,” according to Reuters.

While the application was denied by local officials, citing violence at a similar event in 2016, Reuters reports several online groups, including one dubbed “Defending Stone Mountain,” vowed to march in the park anyway and asked participants to come with Confederate and US flags. Another group, the Atlanta Antifascists, vowed to hold a counter-protest.

The memorial has only been open for a month, and reopened after lockdown during July 4 weekend.

The site is a notorious meeting place for the Ku Klux Klan, which was “reborn” atop it.

In 1915, the KKK was brought back on that mountain with a burning cross and advocates of the carvings were card carrying members of the hate group. After the mountain was complete, “a ‘neo-Confederate theme park’ emerged around the site, including a plantation house, a “Gone With the Wind” museum, according to a report from the Atlanta History Center, The New York Times reported. Since then, KKK members have gathered at Stone Mountain annually to hold rallies, according to the Times.

The population of Stone Mountain is over 78% African-American, according to the US census — with whites making up just 18% — and African Americans also make up the majority of workers in and around the monument.

Black Lives Matters protestors and civil rights groups have long called for the destruction of the monument.

A Florida high school has reportedly prohibited their football team from waving pro-police flags during pre-game ceremonies after critics said the display is...
Read more
US

SEATTLE — Seattle will reduce the police department’s budget and reallocate some money to community programs after the City Council voted Tuesday evening...
Read more
US

Feds execute man who claimed witchcraft led him to murder

The federal government on Tuesday executed a former soldier who claimed his belief in witchcraft led him to rape and murder a Georgia...
Read more
US

A 16-year-old boy has been arrested on suspicion of negligent homicide in the fatal shooting of his younger brother, according to Tucson police. They...
Read more

3D-printer and home-made semi-automatic handgun are seized as cops arrest a...
Read more

A Florida high school has reportedly prohibited their football team from waving pro-police flags during pre-game ceremonies after critics said the display is...
Read more

Innocent Victorians could be arrested in the street or at work and detained indefinitely by power-crazed officials under a new law Daniel Andrews...
Read more

Boy, 2, dies after shooting himself with dad’s gun in North Carolina motel

A two-year-old boy shot himself dead while playing with his dad’s gun in a North Carolina motel — one of three youngsters hit...
Read more
Sport

Macron CRISIS: French President ‘lacks authority’ and told to get a grip on violence

Xavier Bertrand, governor of the Hauts-de-France region, which includes Calais, attacked the French President during an interview with radio channel BFMTV-RMC on Thursday...
Read more