A military flyover scheduled to take place on the Hudson River on the 19th anniversary of the September 11th attacks has been slammed by New Yorkers, with many calling for the ‘tasteless’ idea to be canceled.

The New York City Emergency Management system on Thursday announced an F-18 jet will be conducting a flyover near the Verrazzano Bridge at 3.30pm on Friday.

The aircraft will fly at an altitude of about 2,500 feet, according to a statement posted on Twitter.

The display is intended to be among several tributes held across New York City honoring the victims of 9/11 however, the idea of a low-flying jet on the day the nation will pause and remember the hijacked-plane attacks that killed nearly 3,000 people at the World Trade Center has been criticized as ill-conceived.

‘Granted, I no longer live in NY, but this seems like a really bad idea, verging on completely tasteless,’ Brandon Borrman, Twitter’s VP of global communications, tweeted.

‘Are you out of your mind? Cancel this immediately?’ Staten Island Rep. Max Rose said.

Another critic added: ‘Someone is definitely out of their mind. Why in the world would anyone decide to have a fly over in NYC on September 11th? This is not a tribute, it is extremely insensitive especially to the families of those who were murdered in the Twin Towers that awful and horrific day.’

In a statement to DailyMail.com, aspokesman for the Mayor’s Office said: ‘The mayor wasn’t aware of the flyover, and frankly it’s inappropriate. He looks forward to thanking our heroes and honoring those we’ve lost at the ceremony this morning.’

The spokesperson did not confirm whether the event will be canceled.

The 19th anniversary of the terror attacks will be marked by dueling ceremonies at the Sept. 11 memorial plaza and a corner near the World Trade Center, reflecting a divide over the memorial’s decision to suspend a cherished tradition of relatives reading victims’ names in person. Vice President Mike Pence is expected at both those remembrances in New York, and Democratic presidential nominee Joe Biden at the observance on the memorial plaza.

President Donald Trump and Biden both plan to go to the Flight 93 National Memorial in Pennsylvania – at different times. Trump is speaking at a morning ceremony, with Biden paying respects in the afternoon.

Light tributes to September 11 victims shone across America as commemorations begin on the 19th anniversary of the terror attacks.

Tributes paid to those who lost their lives have been altered this year, with restrictions in place due to Covid-19.

In New York, the annual ‘Tribute in Light’ was almost cancelled after the 9/11 Memorial and Museum said there was a virus risk to the installation crew.

In Washington, a tower of blue light shone over the Pentagon one of many changes to the annual remembrance, which has been scaled back this year. 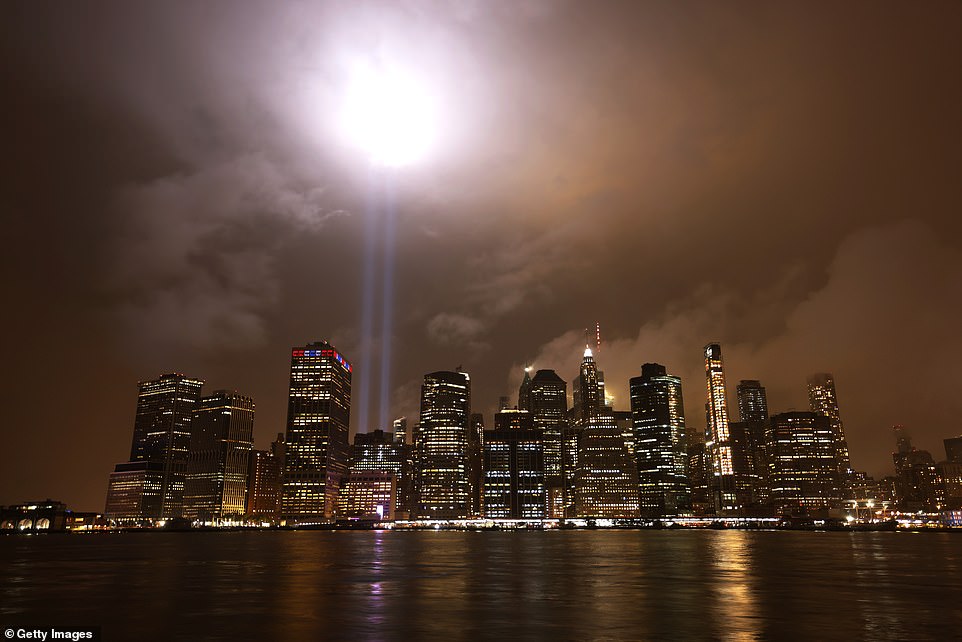 In New York, the annual ‘Tribute in Light’ was almost cancelled after the 9/11 Memorial and Museum said there was a virus risk to the installation crew. The tribute shone above the Manhattan skyline last night 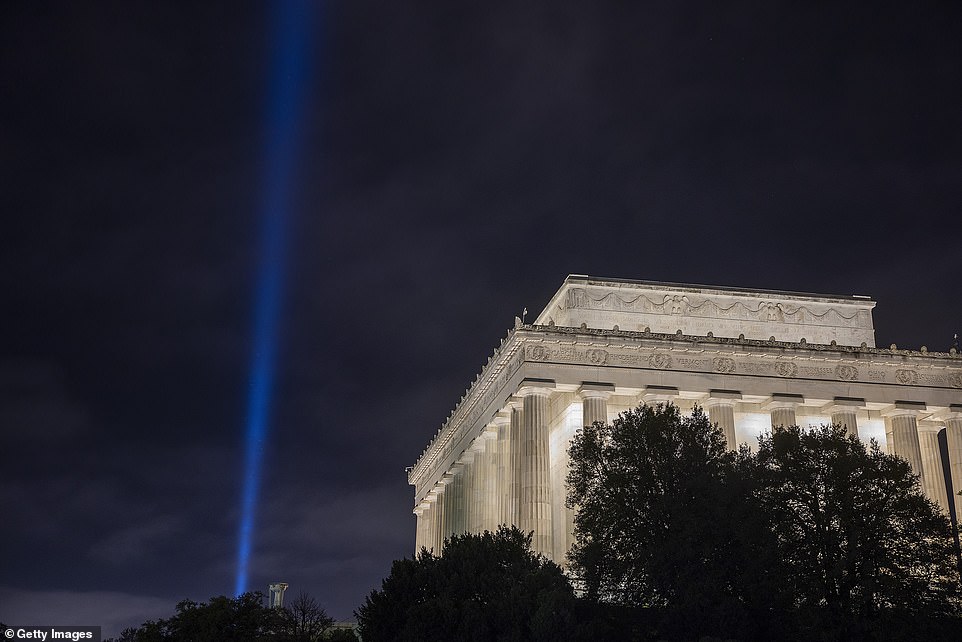 In Washington, a tower of blue light shone over the Pentagon one of many changes to the annual remembrance last night. It will remain lit until the early hours of Saturday 12

The Tunnel to Towers Foundation illuminated its ‘Towers of Light’ tribute next to the Pentagon on Wednesday, and it will remain lit until the early hours of Saturday 12.

This is to honor the lives lost in Flight 77, which struck the Pentagon after being hijacked, killing all 64 passengers and 6 crew on board, and 125 people in the building.

Military leaders will conduct the Pentagon’s ceremony without victims’ families in attendance, and their loved ones’ names will be recited by a recording.

Although they won’t be read on-site, victims’ relatives can visit the Pentagon’s memorial in small groups later Friday. 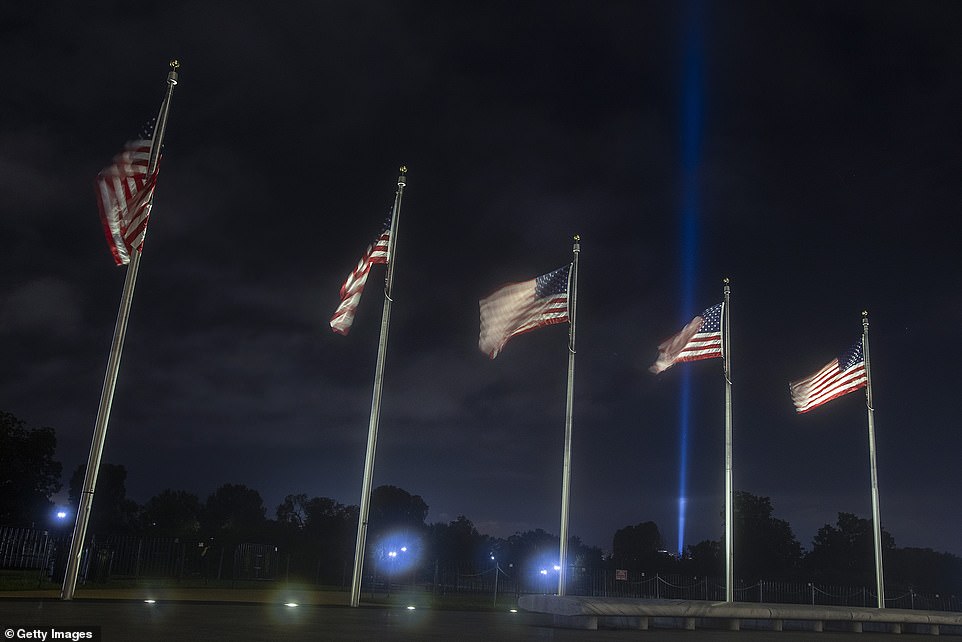 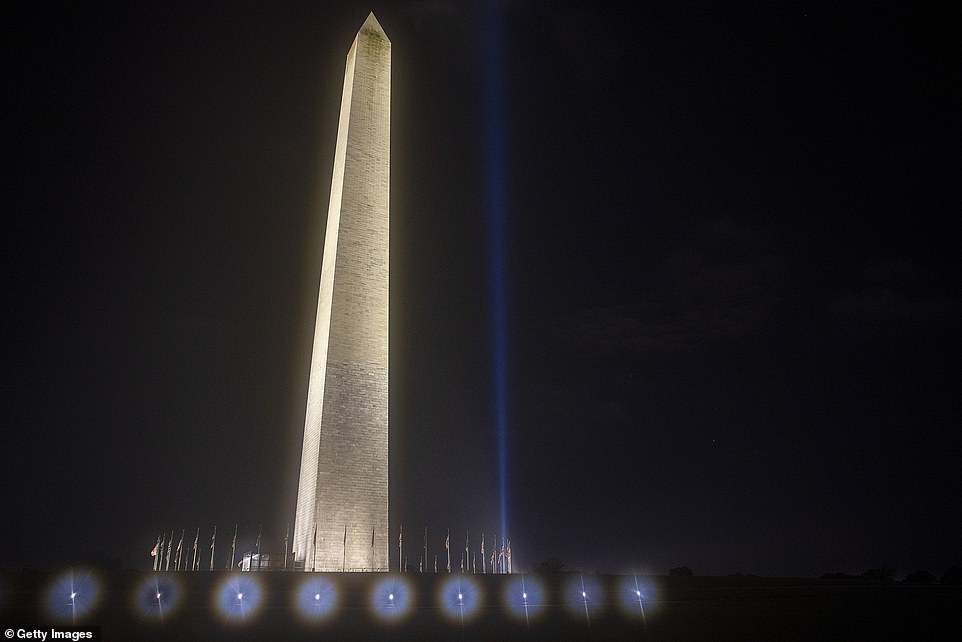 Tributes paid to those who lost their lives have been altered this year, with restrictions in place due to Covid-19

President Donald Trump and Democratic challenger Joe Biden both plan to visit the Flight 93 National Memorial in Pennsylvania on Friday, though not at the same time.

Trump is speaking at a morning ceremony, with Biden paying respects in the afternoon.

It will also be the first time since taking office that neither President Donald Trump nor Vice President Mike Pence will be at the Pentagon ceremony.

Biden will also attend the main New York memorial before heading to Pennsylvania. 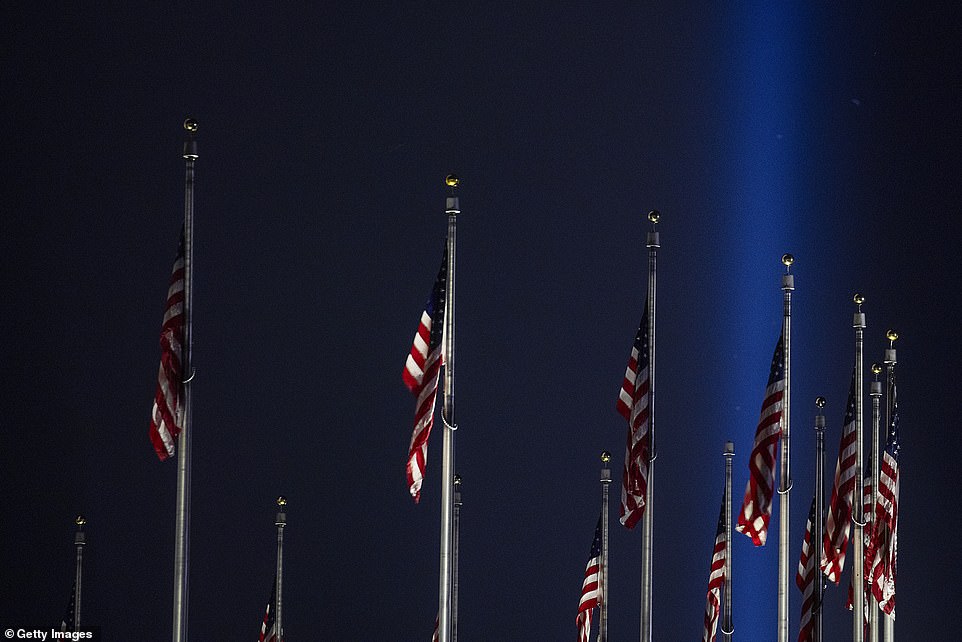 Military leaders will conduct the Pentagon’s ceremony without victims’ families in attendance, and their loved ones’ names will be recited by a recording

In New York, the double beams of light that evoke the fallen twin towers were nearly canceled in the name of virus safety, until an uproar restored the tribute.

The Fire Department cited the virus in urging members to skip observances of the 2001 attacks that killed nearly 3,000 people, among them almost 350 firefighters.

Some victims’ relatives say they understand the ground zero observance had to change in a year when so much else has.

The National September 11 Memorial and Museum cancelled its tradition of having relatives read the names of the dead aloud.

It will offer a recording instead to those gathered at the World Trade Center site. 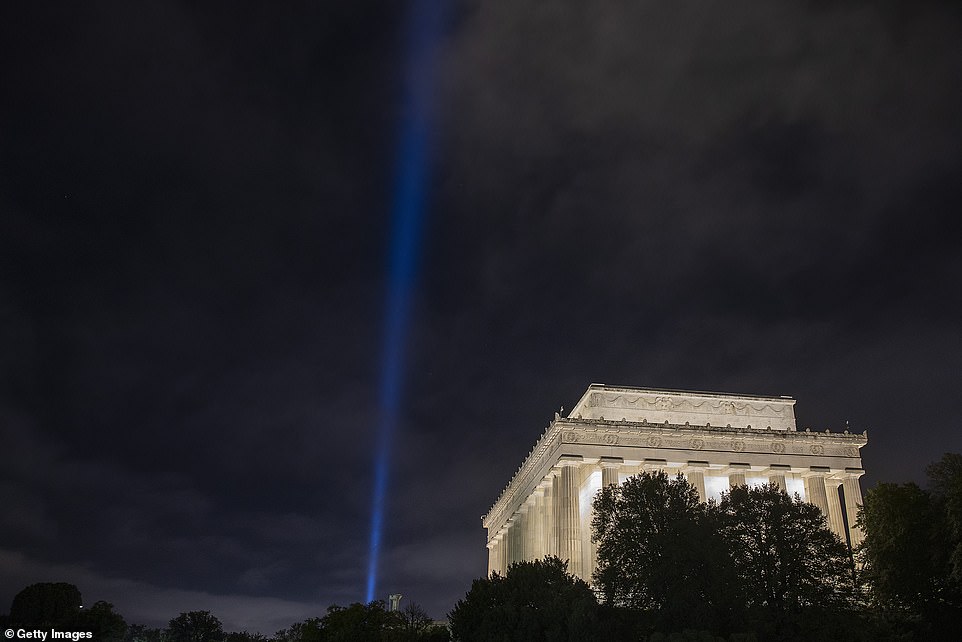 Many events will take place online and not in front of crowds, like the large flag unfurling at the Pentagon

‘It’s another smack in the face,’ says Jim Riches, who lost his son Jimmy, a firefighter.

The father is staying home on the anniversary for the first time this year because he doesn’t want to take chances with the coronavirus after a prior illness.

But he feels others should have the option of reciting the names of the dead on the memorial plaza, instead of listening to a recording.

Some victims’ relatives felt the change robbed the observance of its emotional impact.

A different 9/11 group, the Stephen Siller Tunnel to Towers Foundation, set up a simultaneous ceremony in response to this in New York. 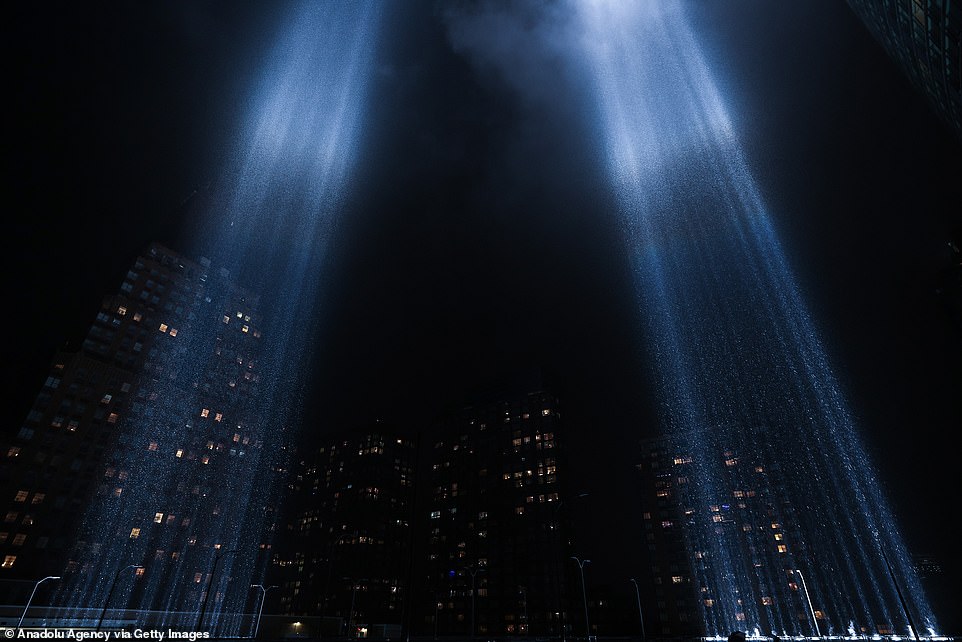 The 9/11 Memorial and Museum’s annual ‘Tribute in Light’ will also go ahead after it was announced last month the twin blue beams that shine into the night sky over lower Manhattan were to be cancelled.

While there’s no official gathering to view the lights, the memorial cited virus risks to the installation crew.

The cancellation outraged some victims’ relatives, police and fire unions and politicians, who noted that construction sites around the city were deemed safe to reopen months ago.

After the Tunnel to Towers foundation said it would organize the display on its own, Governor Andrew Cuomo and former Mayor Mike Bloomberg, the memorial’s billionaire chairman, stepped in to keep the memorial-sponsored lights on.

This comes after a federal judge directed the Saudi Arabian government to make officials available for depositions about their knowledge of the terror attack, which killed almost 3,000 Americans, on the eve of the anniversary. 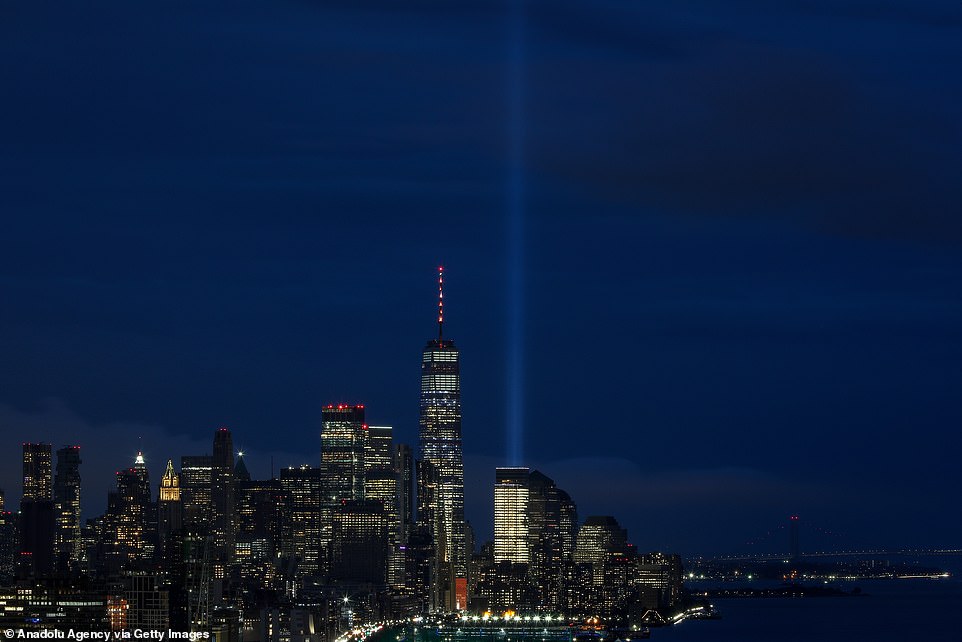 Governor Andrew Cuomo and former Mayor Mike Bloomberg, the memorial’s billionaire chairman, stepped in to keep the memorial-sponsored lights on

This includes as many as 24 current and former officials such as Prince Bandar, the former ambassador to the United States, according to Yahoo! News.

The order has been praised by families of the 9/11 victims as a milestone in their years-long effort to prove that some Saudi officials were either complicit in the attacks or had knowledge of the hijackers plans months before.

However the effect of the ruling may depend on the willingness of the Saudi government to make its citizens available for testimony as some figures no longer hold positions and therefore cannot be compelled to testify.

The question of possible involvement in the 9/11 attacks by Saudi officials has been a subject of intense debate for years but it is something the Saudis have consistently denied.

Lawyers for the victim’s families have developed a circumstantial case that two of the hijackers, Khalid al-Mihdhar and Nawaf al-Hazmi, received financial support from individuals associated with the Saudi government.

Two British girls reportedly gang-raped while on vacation in Italy