Newly-appointed USPS Postmaster General Louis DeJoy was given a rude awakening Saturday morning when hundreds of noisy protesters descended on his Washington D.C. home amid claims he is engaging in voter suppression.

The ‘noise demonstration’, led by Shutdown D.C., marched to DeJoy’s Kalorama condo where they blew horns and beat on saucepans to issue an early morning ‘wake up call’ to the Trump donor.

He has been accused of ‘dismantling’ the United States postal service and actively suppressing voters ahead of November’s election, when it is estimated that half of the voting population will be reliant on mail-in ballots as a result of the coronavirus pandemic.

Protesters called for DeJoy to be fired as they claimed he has been aiding Trump in meddling with the election.

It comes after former President Obama accused Trump of ‘kneecapping USPS’ to suppress voters by withholding the vital funding needed to ensure that mail-in ballots can be adequately processed and delivered in November.

Trump on Thursday admitted that he is withholding the funds to the post office as he doesn’t want to see the money spent on mail-in voting, as he continues to claim postal voting will lead to fraud, despite voting by mail himself.

On Friday, the Postal Service’s inspector general announced it is examining possible conflicts of interest involving DeJoy, who has donated $2.7 million to Trump and his fellow Republicans, and his recent changes to the post office. 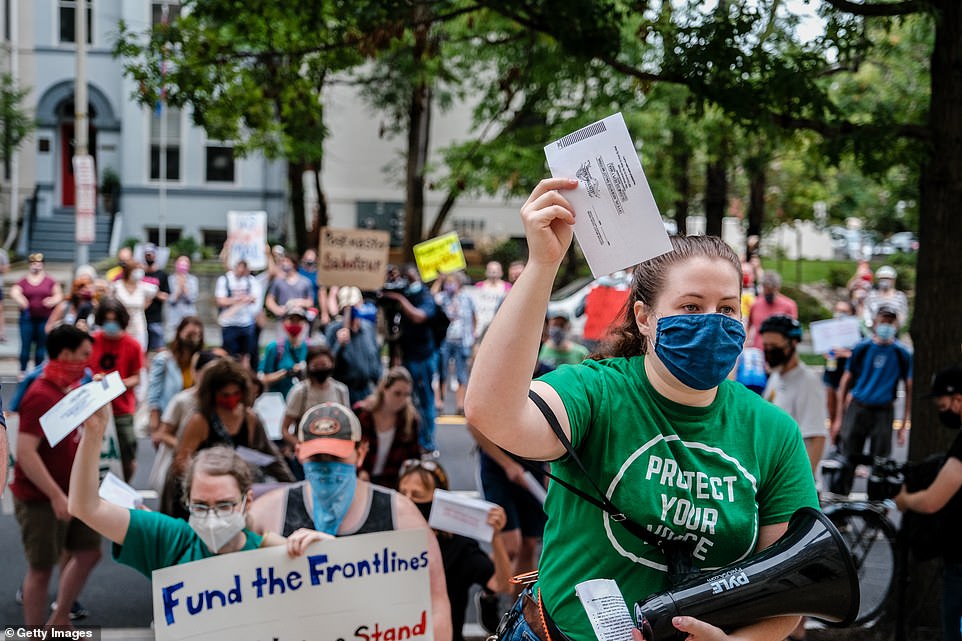 Hundreds gathered outside the home of USPS Postmaster General Louis DeJoy in D.C. Saturday morning to demand he resign 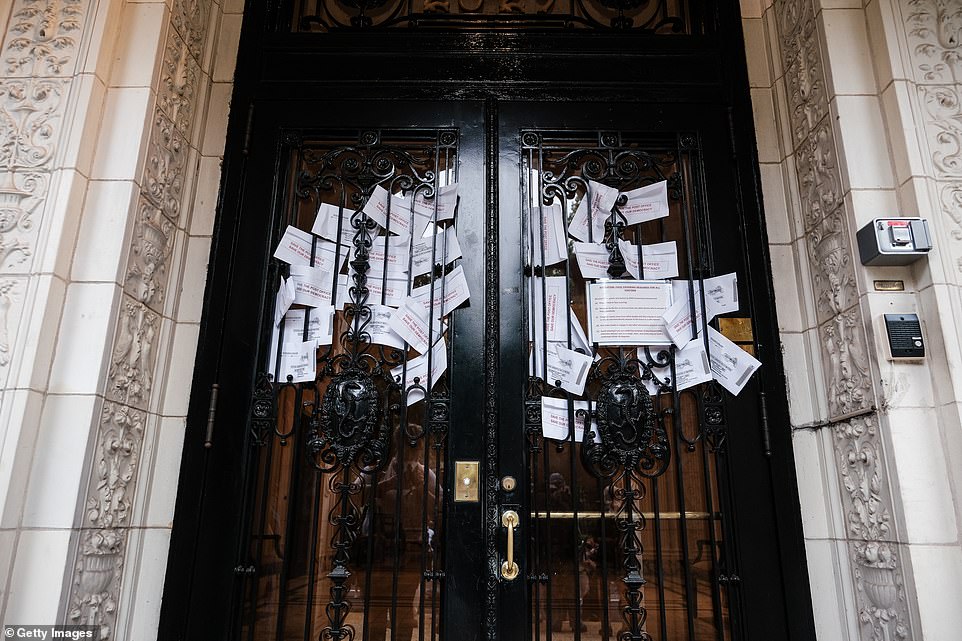 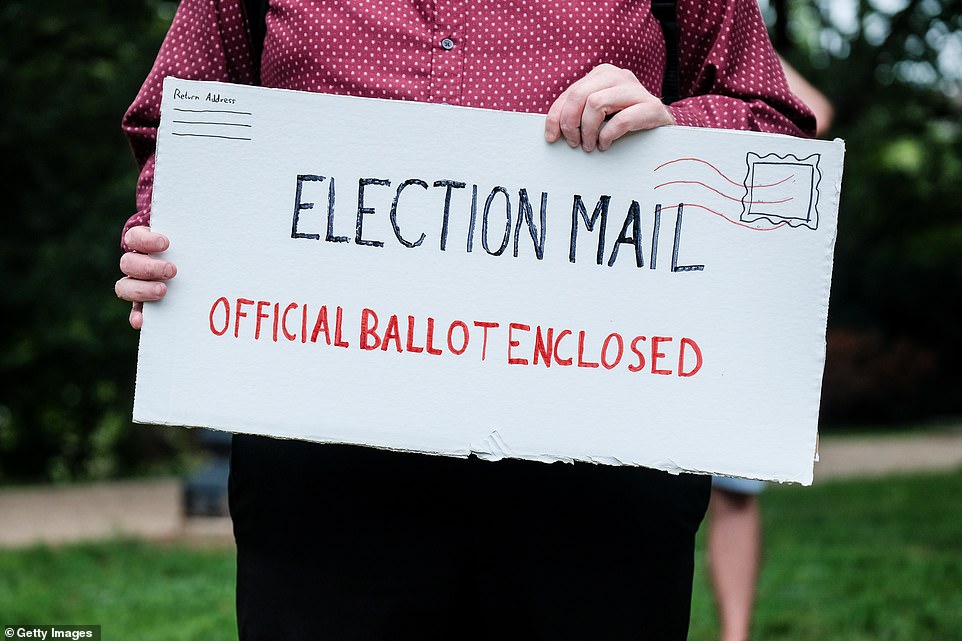 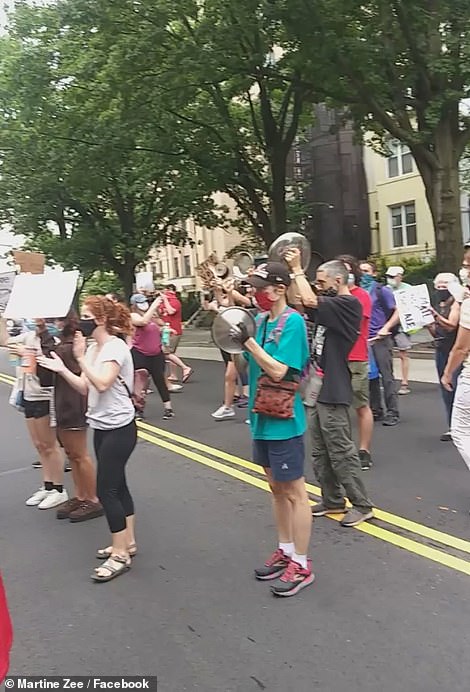 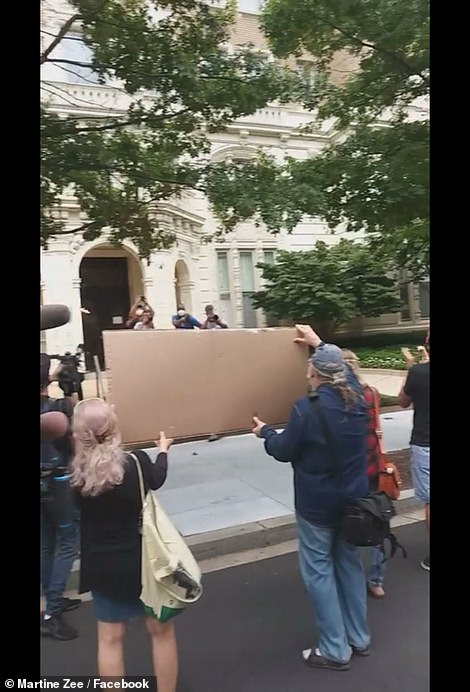 Shutdown D.C. organized the ‘noise protest’ as a ‘wake up call’ for DeJoy Saturday morning. They marched to his home where they began to blow horns and to band on saucepans as they called for him to resign from his role

DeJoy owns millions of dollars in stock in Postal Service rivals and customers, according to a financial disclosure form filed by his wife.

Since his appointment, which was made despite him having no background in the postal service, DeJoy has been highly criticized for the ‘cost-cutting’ changes he has made, including eliminating overtime for hundreds of thousands of postal employees and mandating that mail be held if distribution centers are understaffed or running behind.

All the measures are said to have caused widespread delayed in the postal service.

Democratic congressional leaders and committee leaders also sent a letter to DeJoy on Friday demanding an explanation for changes he is making at postal facilities. 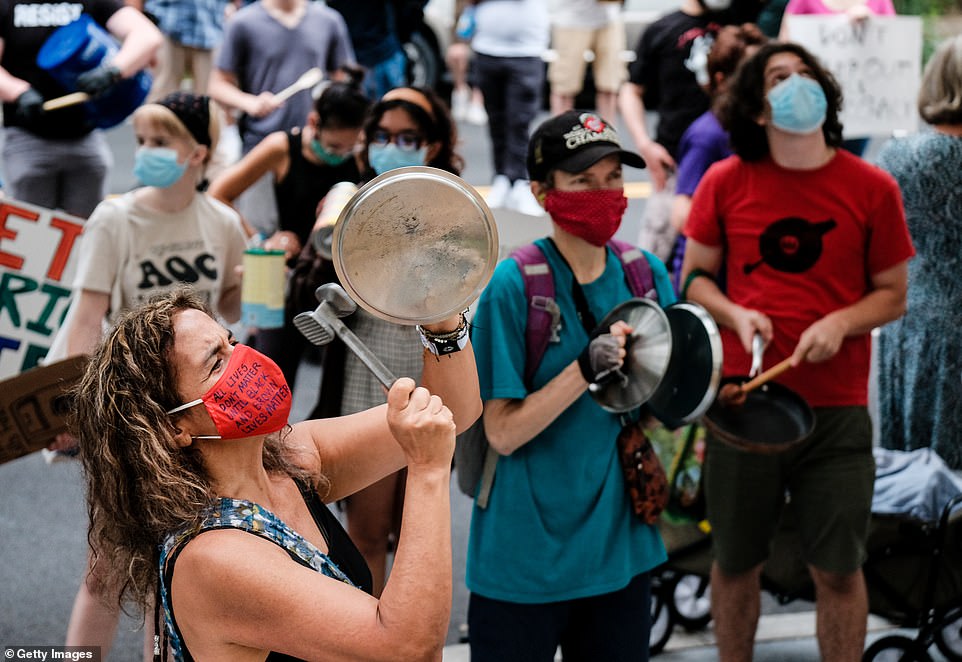 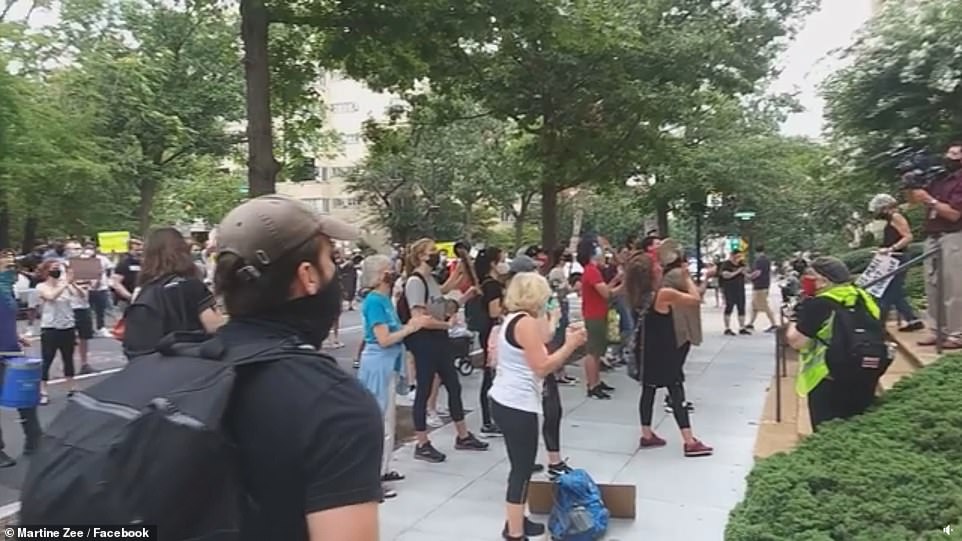 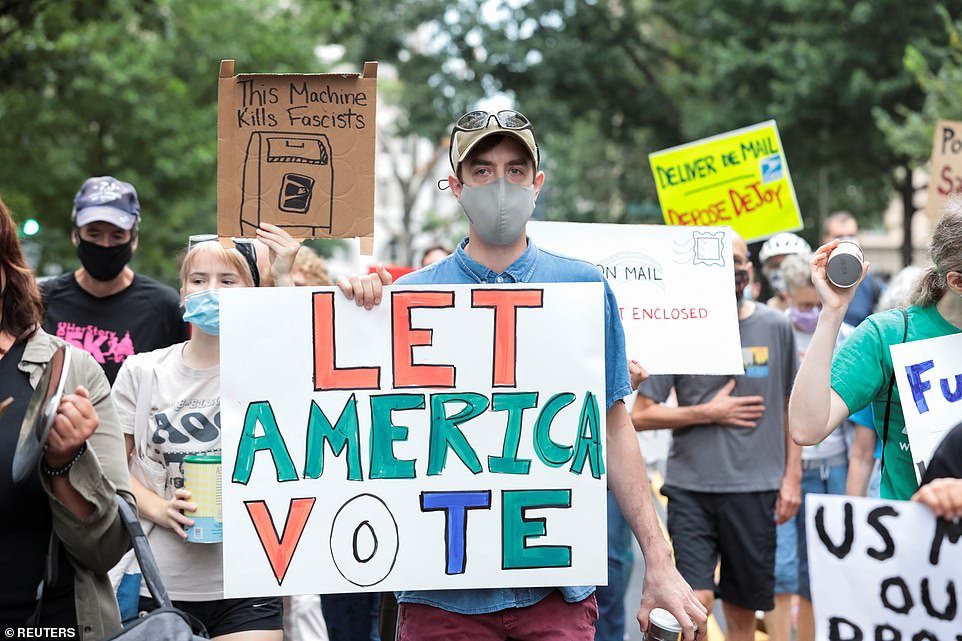 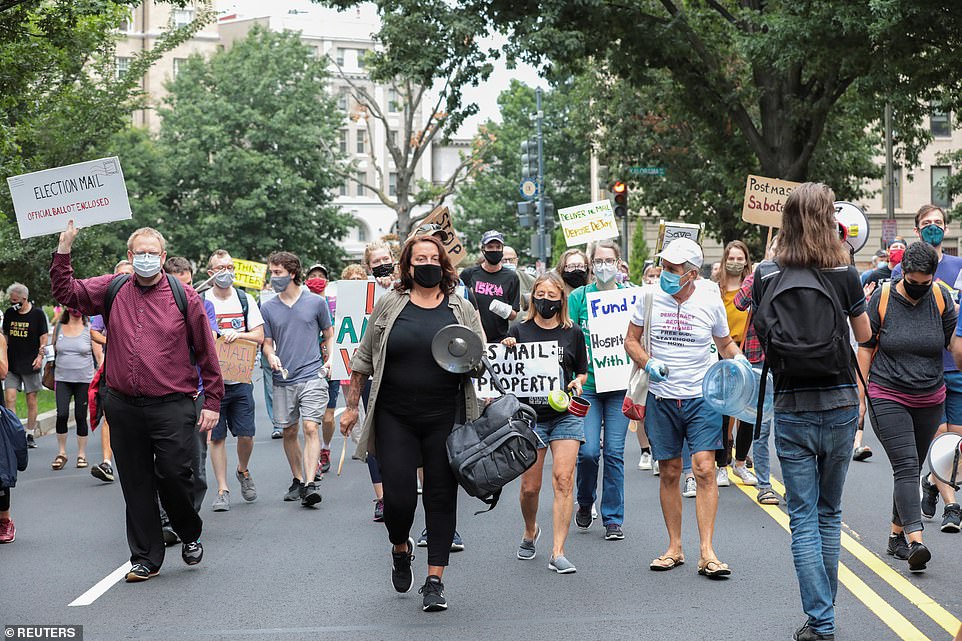 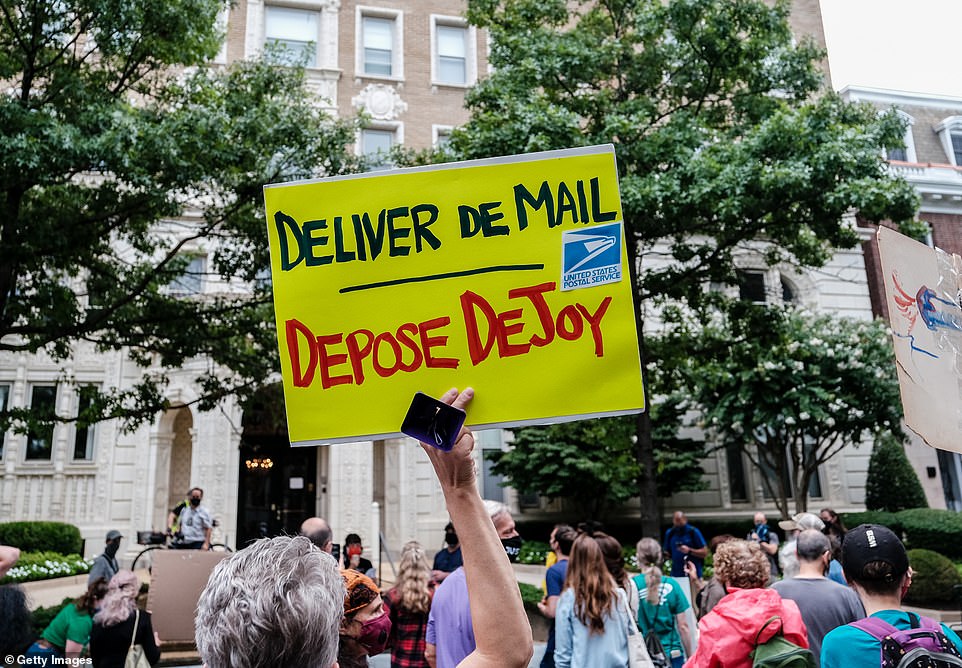 The protest emerged after complaints that the postal service is being delayed. They called for the service to be returned

Adding to concerns for voters are rumors that mailboxes across the country are disappearing, making it more difficult to post a ballot.

USPS argued this week that the mailboxes were simply being removed by the postal service due to declining mail volume as DeJoy said that they had to be taken away because of the service’s untenable financial situation.

‘First-class mail volume has declined significantly in the U.S., especially since the pandemic,’ Ernie Swanson, a spokesman for the USPS, told The Oregonian/OregonLive. ‘That translates to less mail in collection boxes.’

While Swanson said that the move should not impact anyone, the news that mailboxes are decreasing alarmed some who felt it could be part of a plan by DeJoy and Trump to slowdown the postal service and as such, slow down voting in the election.

It was revealed Thursday that President Trump had an Oval Office meeting last week with DeJoy as more allegations emerged that the billionaire mega-donor to the Republican Party put the policies in place to aid the president get reelected. 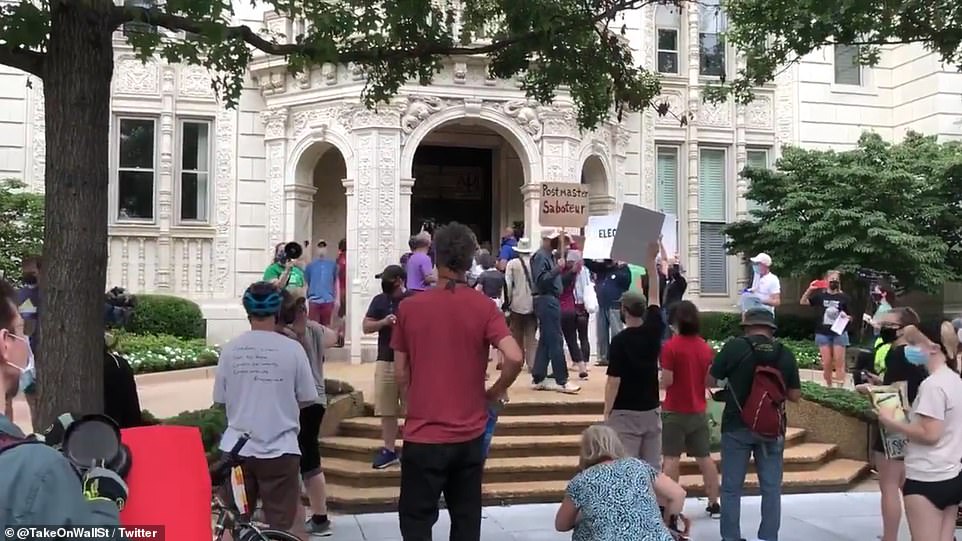 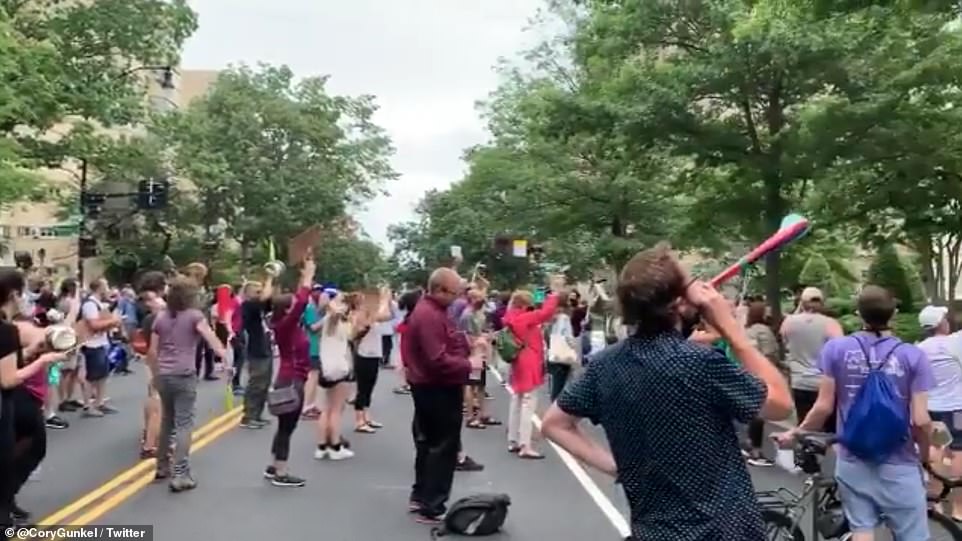 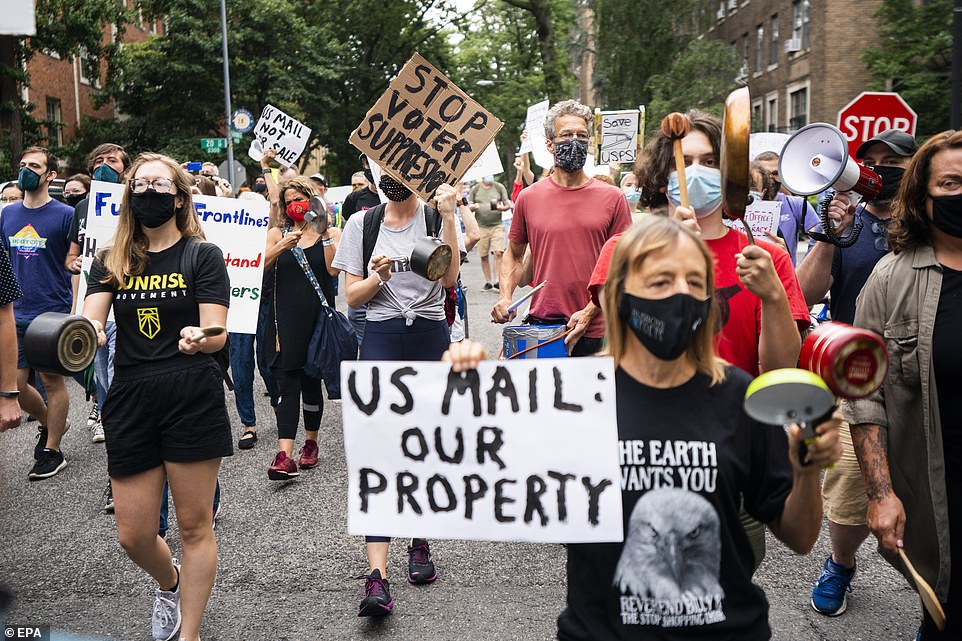 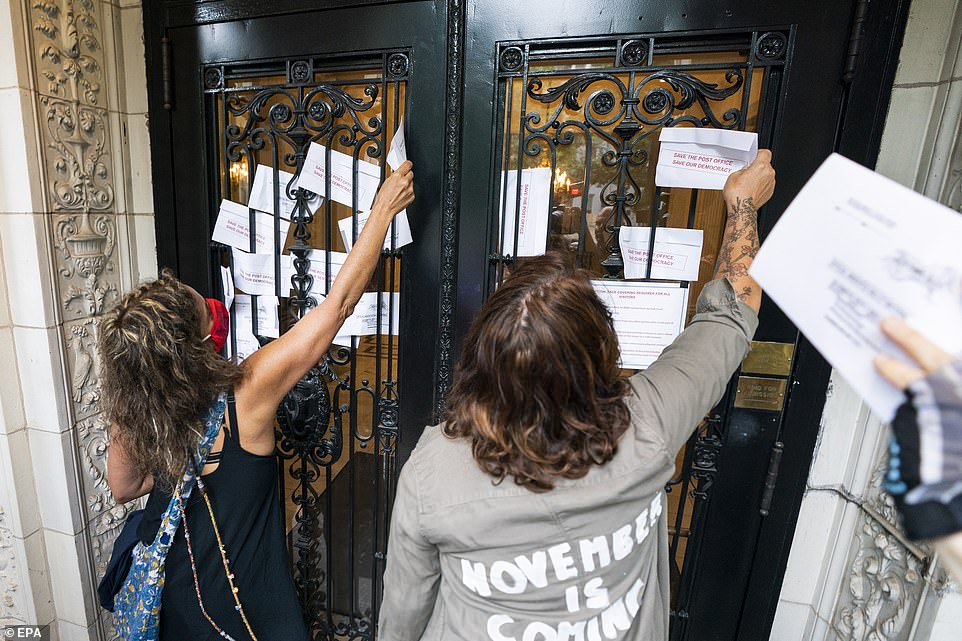 ‘On the eve of a presidential election, in the midst of the worst public health pandemic in 100 years, Mr. DeJoy has pledged his allegiance to the political expedience of President Trump at the expense of protecting our democracy and access to the ballot.

‘He has deliberately enacted policies to sabotage the Postal Service to serve only one person, President Trump. He has failed the American people. Mr. DeJoy must resign.’

The claims led to Saturday morning’s protest, which also called for DeJoy to be removed from his role or resign.

The protest gathered at Kalorama Park in Adams Morgan on the corner of Kalorama Road and 19th Street before 9am Saturday before walking to his home where they stayed to demonstrate.

According to WUSA9, some protesters were seen stuffing fake absentee ballots into the Postmaster General’s apartment lobby door. 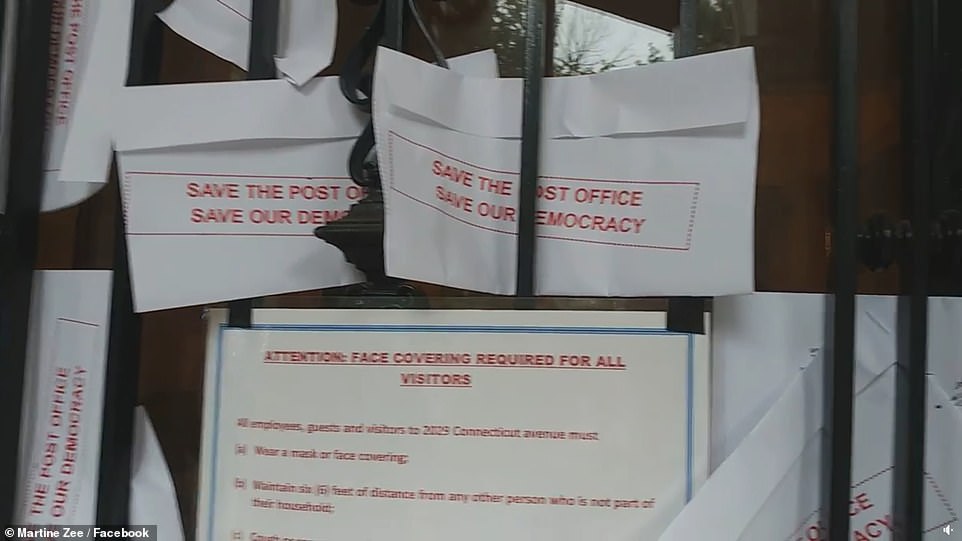 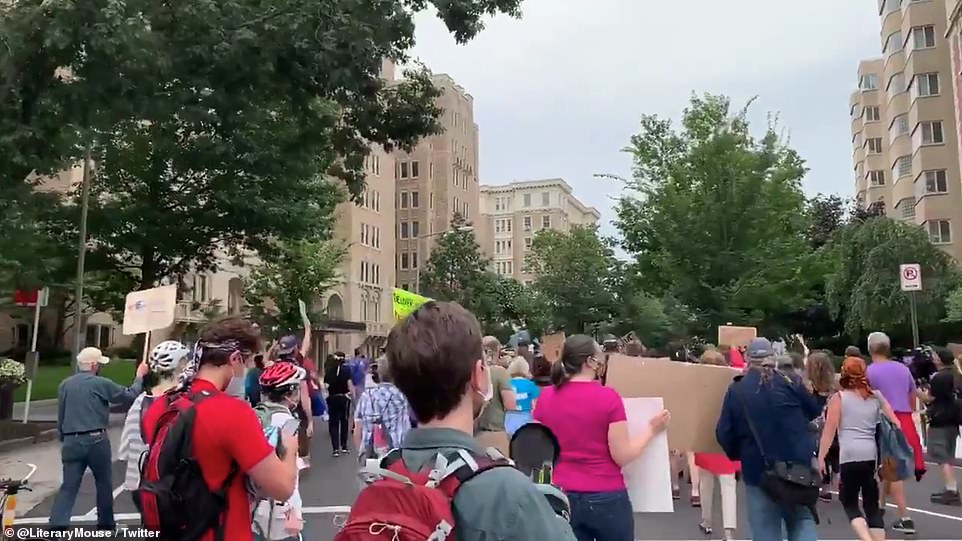 The group marched a short way to DeJoy’s home. He was not seen during the protest 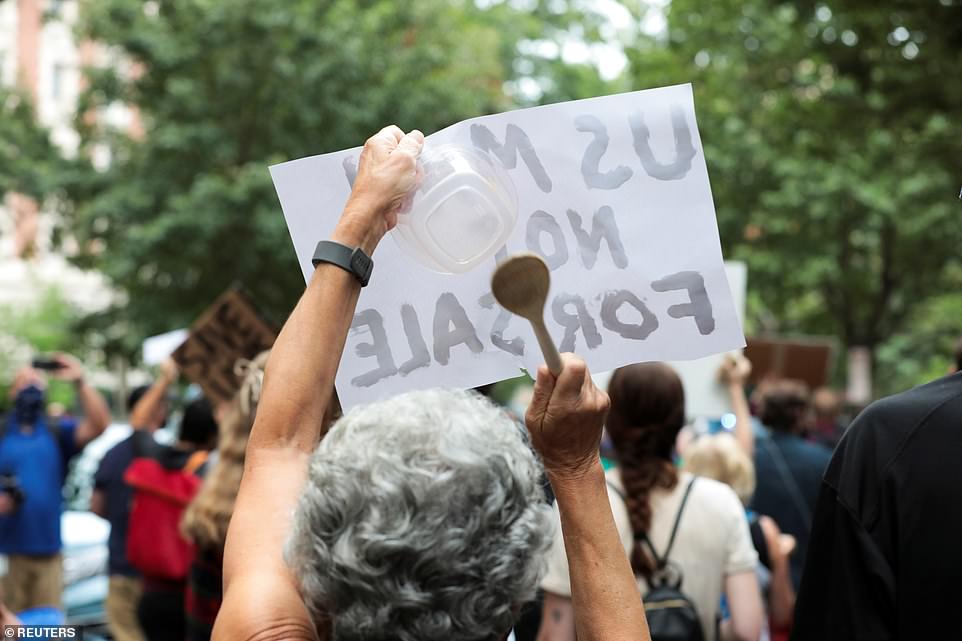 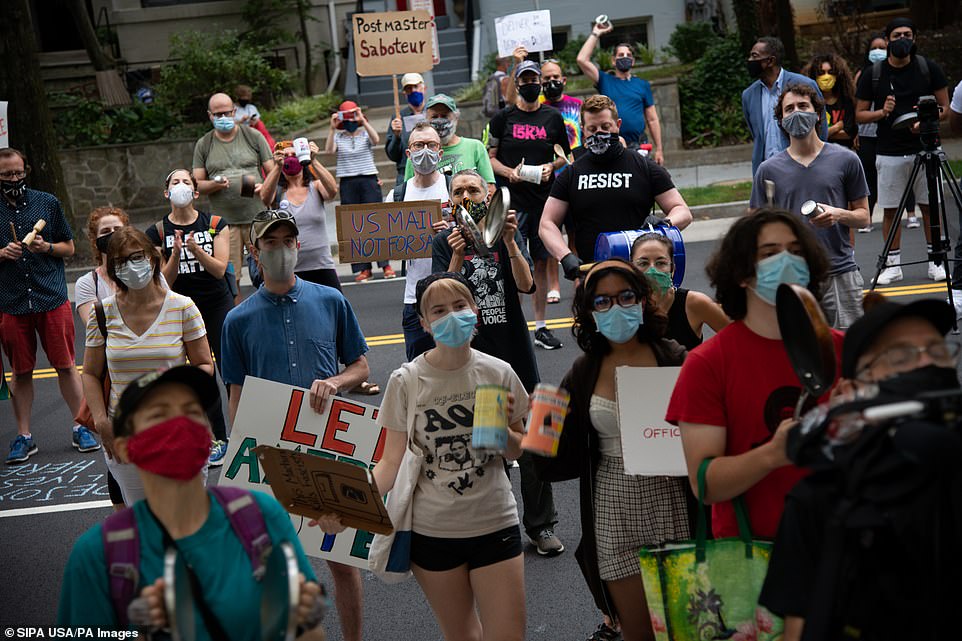 Hundreds of protesters were involved in the Saturday morning demonstration in Washington D.C.

‘DeJoy has fired or reassigned much of the existing USPS leadership and ordered the removal of mail sorting machines that are fundamental to the functioning of the postal service. Meanwhile, mail delivery is slowing down under other decisions made by DeJoy, such as eliminating overtime for postal workers,’ the group said in a statement.

DeJoy has denied all the allegations that he is acting to aid Trump by slowing down the postal service.

‘Despite any assertions to the contrary, we are not slowing down Election Mail or any other mail,’ he said last week.

The investigation from the inspector general into DeJoy comes as the Postal Service is warning states there is ‘significant risk’ voters will not have enough time to complete and return their ballots. 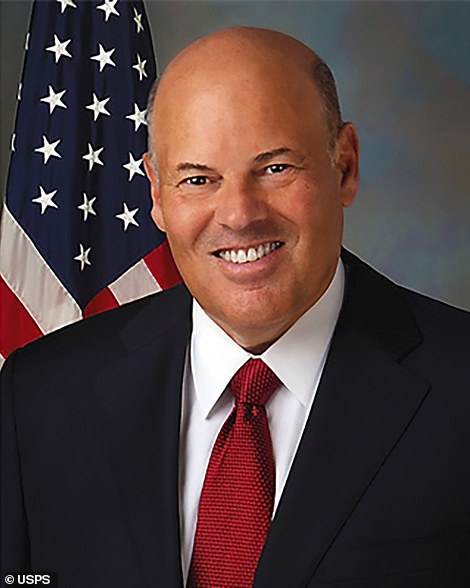 The Postal Service late on Friday released letters it had sent to 46 states and the District of Columbia, after the Washington Post reported earlier on the extent of the warnings.

The warning highlighted the possibility that a meaningful number of mail votes in the November 3 presidential election might go uncounted if they are returned too late.

Election officials are bracing for a deluge of mail ballots as many states have made it easier to vote by mail to address concerns about public gatherings during the coronavirus pandemic.

Mail voting is expected to surge to 50 per cent as the coronavirus pandemic rages ahead of the election.

Yet the postal service is in dire financial straits having made a loss of $4.5billion in the first quarter of 2020, before the pandemic even properly took hold of the country.

According to Associated Press, the service has ‘warned they will run out of money by the end of September without help from Congress’.

Yet the president has denied this help, as he continues to claim that mail-in voting will lead to the election being a ‘fraudulent mess’.

The USPS got caught up in a political fight between Democrats and President Trump over an emergency funding provision for the service in an overall bill designed to offer financial relief from the coronavirus.

Democrats want $25 billion for the service but President Trump called it election money although he has since indicated he may be inclined to cut a deal. 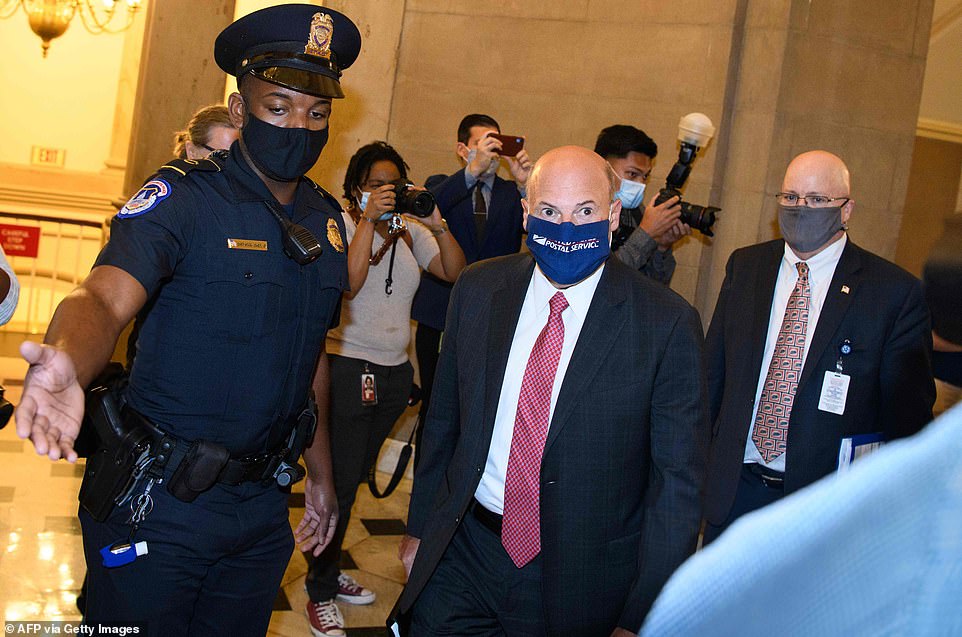 It was revealed President Donald Trump held an Oval Office meeting with Postmaster General Louis DeJoy (above) last week before DeJoy’s meeting with Democrats on Capitol Hill. Trump and DeJoy are accused of working to suppress voters

‘The President, his cronies and Republicans in Congress continue to wage their all-out assault on the Postal Service and its role in ensuring the integrity of the 2020 election,’ the two leaders said in a joint statement.

Trump, who is falling further behind rival Biden in his fight for reelection, is leading a vigorous campaign to sow doubts about mail-in voting and how it could lead to voter fraud and election collapse.

On Saturday morning, he claimed that the U.S. ‘will maybe never know who won’, questioning the legitimacy of the election before it has even happened.

He was responding to reports of fraudulent ballots that were uncovered during a recent local election in New Jersey.

The article said 20 per cent of mail-in ballots in Paterson had been rejected after some were found to be linked to out-of-towners or dead residents.

The report was tweeted by GOP national spokeswoman Elizabeth Harrington who accused Democrats of tampering with ballots in New Jersey and other states in recent elections.

Evidence has shown that mail voting is as secure as any other method and Biden and other Democrats say Trump is simply trying to interfere with the election by withholding funding to the post office. 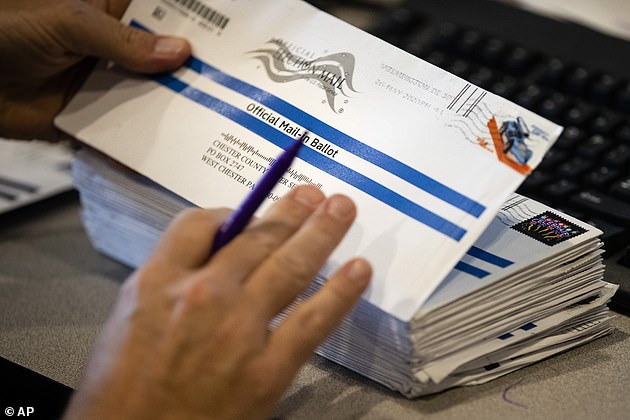 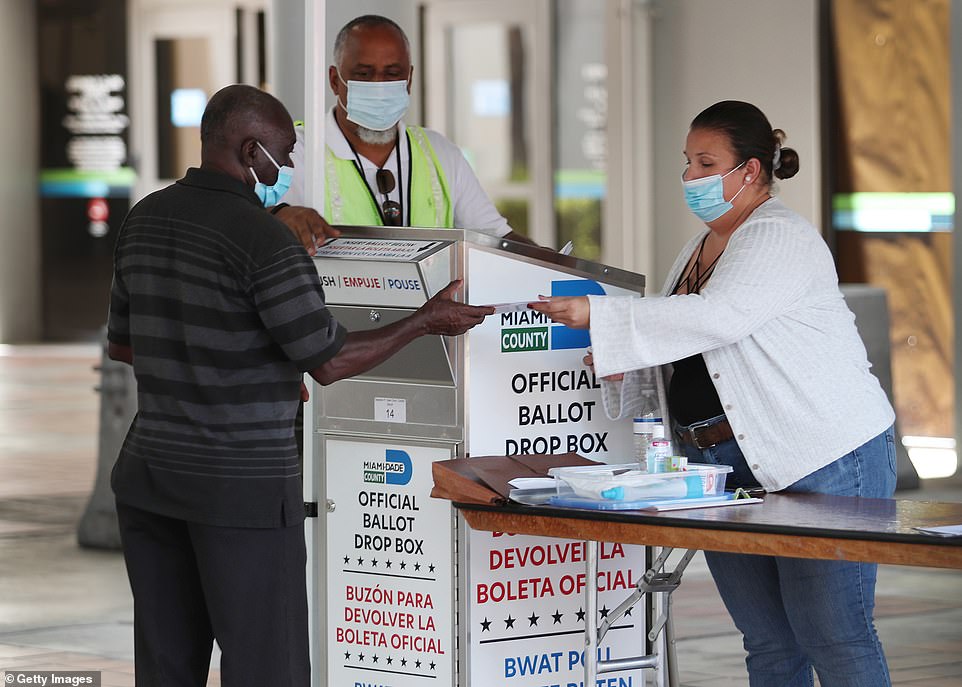 Obama became the most-high profile name to add his criticism to the situation when he accused Trump of starving the U.S. Postal Service of much needed funds in order to re-ensure his re-election. The former president challenged Republicans to do something about it.

‘What we’ve seen in a way that is unique to modern political history is a President who is explicit in trying to discourage people from voting,’ Obama said.

‘What we’ve never seen before is a President say, “I’m going to try to actively kneecap the postal service to encourage voting and I will be explicit about the reason I’m doing it”.’

‘That’s sort of unheard of.

‘You now have the President throwing in this additional monkey wrench trying to starve the postal service,’ Obama added.

‘My question is what are Republicans doing where you are so scared of people voting that you are now willing to undermine what is part of the basic infrastructure of American life?’

Obama’s concerns came as United Parcel Service and FedEx on Friday shot down social media calls that they step in to deliver mail-in ballots from USPS, which is warning states of potentially ‘significant’ delays.

‘State ballots must be postmarked to be considered valid and only the USPS has lawful postmarking status. Therefore UPS, FedEx and other private parties cannot technically be involved in shipping ballots,’ UPS told Reuters in a statement.

‘FedEx does accept individual ballots, and we advise that customers planning to return their ballots via FedEx should closely review their state’s guidelines on absentee voting and deadlines for ballots or related election documents,’ FedEx said.

Mitt Romney lashed out Wednesday night after President Donald Trump refused to say if he would peacefully give up his seat in January...
Read more
News

Tubes and trains were once again packed this morning as commuters continue to head into the office in their droves - 36 hours...
Read more
News

One of the volunteers for a controversial vaccine trial where they will be deliberately infected with coronavirus revealed they will be locked up...
Read more
News

Wells Fargo CEO Charles Scharf apologized Wednesday for comments he made suggesting it is difficult to find qualified black executives in the financial...
Read more

Victoria Azarenka powers into the US Open semi-finals as she crushes...
Read more
US

One of the two storms set to smack the southern U.S. coast will likely turn into a hurricane Tuesday, forecasters warned as the...
Read more
Sport

HOT OR NOT: Normal service resumed as Jimmy Anderson shows his brilliance

HOT OR NOT: Normal service resumed as Jimmy Anderson shows his...
Read more